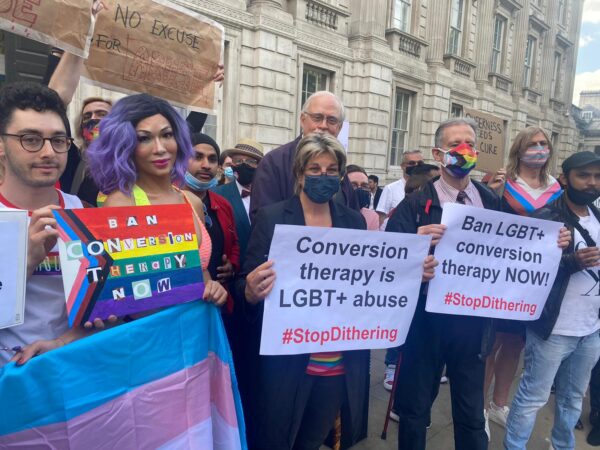 The UK government has insisted it will ban so-called conversion therapy for gay or bisexual people in England and Wales – but not for transgender people. This announcement comes hours after it said it would drop the ban entirely.

“The Government has done a double u-turn on conversion therapy. Initially, it ditched all plans to ban LGBT+ conversion practices and then, under pressure, it partially reversed its decision. Now the government will only ban gay conversion therapy but not its trans equivalent.

“A ban on conversion therapy that is not trans-inclusive is not a genuine ban at all. Excluding trans people from protection against abusive, harmful conversion practices is shameful. It is a callous betrayal that will leave vulnerable trans people at the mercy of exorcisms, beatings, emotional blackmail and psychological brow-beating.

“The Peter Tatchell Foundation will never accept a conversion therapy ban that does not protect our trans siblings. We will support their struggle for reinstatement. United we stand.

“The Government promised a comprehensive ban nearly four years ago and reiterated this commitment in the Queen’s Speech last year. We feel conned and tricked.

“The Prime Minister has taken a decision to appease transphobes who oppose protection for trans people and who support attempts to turn them cisgender. He’s throwing trans people under the bus. It looks like a bid to stoke trans culture wars for political gain in the run-up to the next election.

“This half-baked ban is another broken promise by the government. It’s more proof that Boris Johnson cannot be trusted.

“Only on Wednesday, Government minister Mike Freer assured Parliament and the LGBT+ community that all conversion therapy would be outlawed. He appears to have been misled, by-passed and hood-winked by 10 Downing Street.”

NHS England and other major psychological bodies in the UK have warned all forms of conversion therapy are “unethical and potentially harmful”.

It has been reported the ban as it stands will be announced in the next Queen’s Speech in May.