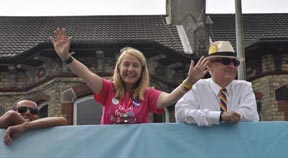 Katy Bourne, the Police & Crime Commissioner has congratulated Sussex Police and Pride organisers for delivering a fun and successful event.

It is the second time that the Commissioner, has attended Pride in her role as PCC and she says that this year’s event was a particularly enjoyable one.

Mrs Bourne, said: “The good humoured crowds appeared to be bigger than ever but the atmosphere remained carnival-like and I was delighted to be part of this.

“Before the Pride Parade left Madeira Drive, I did a walkabout with my Surrey colleague, Kevin Hurley, who had never been to a Pride event before. Mr Hurley thoroughly enjoyed the uniqueness of the day and appreciated all the hard work that goes into it.

“Pride this year was particularly special given that gay couples are now allowed to marry. Something that the rest of us often take for granted.

“This year’s theme was ‘#FreedomToLive’ and I was pleased to see that there was huge support in the parade for those living in countries that are persecuted for their sexuality.

“I would also like to thank partner organisations for helping to make the weekend as safe as possible for the tens of thousands of additional people in the City.

“Getting the right balance in policing an event like this is crucial. Officers were there to uphold the law and keep people safe and I witnessed them being professional, good humoured and friendly, despite many of them working incredibly long shifts.

“I’m looking forward to speaking to the Pride organisers in order to find out how some of the changes they implemented this year impacted on the local community, particularly, the ticketing of the Pride Village Party in St James Street.

“I would also like to thank everyone who visited my stand in Preston Park as part of my Talk Sussex programme, which is an opportunity for residents to have their local say in local policing and crime priorities.

“Members of the Sussex Youth Commission worked on my stall this year and helped get over 80 Community Remedy surveys filled out as well as continuing their ‘Big Conversation’.

“I am already looking forward to next year’s Pride.”