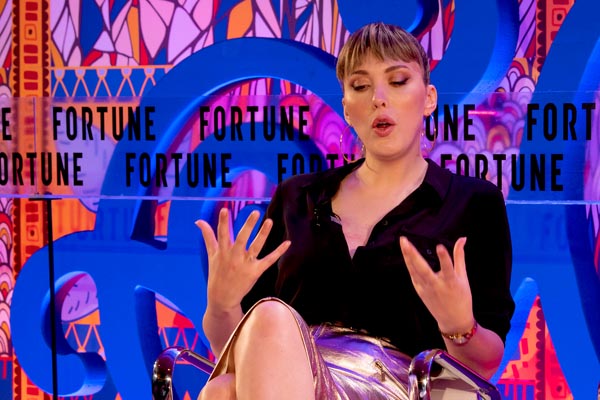 Paris has been described as “the voice of a generation” by i-D magazine, “Britain’s leading trans activist” by the Evening Standard, and one of Britain’s “new suffragettes” by British Vogue, where she is now a regular columnist.

Alexandra Keith said: “We’re really trying to bring back the mission and purpose of our brands, so for Pantene – which is all about giving women healthy, beautiful hair – we did a study with Yale University.

“Following studies with 8,000 women, in 11 countries, we found that across the world, hair is more important than almost anything else to the way a woman expresses herself.

“So our new platform is about the transformative power of hair. Here in the UK, I’m really proud to announce our partnership with Paris to help bring to life Paris’ story and journey, and the role that her hair has played.”

The FORTUNE Most Powerful Women International Summit is an opportunity to connect with female change makers in the UK, Europe, and beyond to exchange ideas and forge new alliances. The theme of the 2019 programme was Leading Together.

Paris added: “When I first transitioned as a teenager, I was messed about by the NHS like many trans people are. I wasn’t actually getting the support that I needed, and I didn’t have any medical interventions or hormones at that point… [So] the way that I was communicating to the world that I was female… was through my hair, make up and clothes. These things don’t make us women, but it was just such a powerful way for me to express myself.

“There is such an emotional element to hair. I think for me, it’s such a powerful expression of femininity. For me, my hair is my crowning glory because it grew out of my head – it’s me, it’s indivisible from me.

“When I was growing up the only time I saw trans people in the media was when we were presented as objects of pity, ridicule or disgust. We were never celebrated and there was a caricature of ‘too much make up, fake hair, fake boobs’ – this idea that you were artificial.

“I never thought that trans people would be celebrated – I thought that we could maybe reduce the stigma, but I didn’t realise… we would be winning awards and appearing on the front of magazines. What a great message for kids that when they are turning on the TV or looking online, brands are celebrating [people like me].”