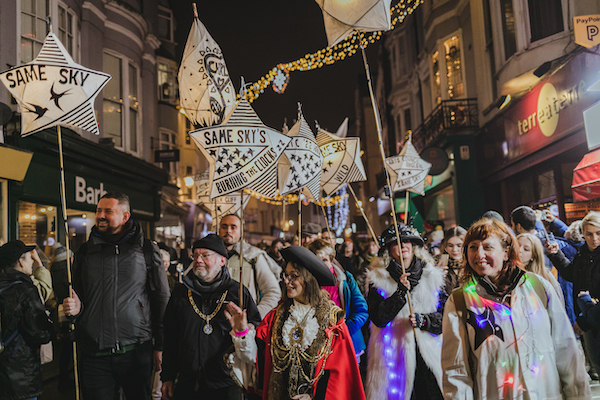 Same Sky, the community arts charity known for organising Brighton’s annual winter solstice parade and celebration Burning the Clocks, has announced that they have raised £7,036.91 through their crowdfunding campaign and business partnerships over the past few months.

Robert Batson, Executive Producer at Same Sky, said: “We are grateful to everyone who contributed to the success of this year’s Burning the Clocks event. It was wonderful to see the community come together again to participate in the parade and celebrate the Winter Solstice. Thank you to all who were involved.

“We are extremely grateful to everyone who supported our crowdfunder and donated on the night. A special thank you goes out to our charitable event sponsor, Hanningtons Brighton. Without their support and the generous contributions from our community, this event would not have been possible. In total, we were able to raise over £7,000 thanks to everyone’s efforts. For an event that can cost up to £45,000, this support from the community makes a massive difference.”

The event’s volunteer-led bucket collection raised £3,029.43, and £1,301.50 was raised through card payments on the night. The online crowdfunder campaign also raised £2,191 from 55 supporters with another £515 from individual donations made after the crowdfunder concluded.

The crowdfunder was made possible thanks to local artists and businesses donating prizes to the crowdfunder including long time supporters the Chilli Pickle, Theatre Royal, and this year’s charitable sponsor Hanningtons Brighton. Local artist Graham Carter also created a collection of limited edition A2 giclee prints for Burning the Clocks, representing this year’s theme of Wild. Support was also made available from Arts Council England and the Chalk Cliff Trust.

For the latest updates from Same Sky, and opportunities to help with Burning the Clocks 2023, visit Same Sky’s Website or their Facebook Page.