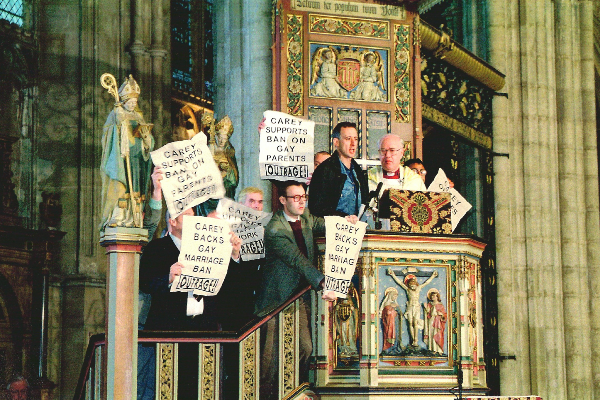 Sunday, May 10 is the 30th anniversary of the formation of trailblazing queer rights / direct action group OutRage!, which was formed following a wave of homophobic murders, particularly that of actor Michael Boothe, and a rise in the number of gay and bisexual men arrested and convicted for consenting, victimless behaviour.
OutRage! was formed in May 1990 at a meeting at the then London Lesbian and Gay Centre in Farringdon. The meeting was called by three gay journalists – Keith Alcorn, Chris Woods and Simon Watney – and attended by 30+ LGBTQ+ activists.

Two of Outrage!’s early key demands to the police were: ‘Protection, not persecution!’ and ‘Policing without prejudice.’

Soon after the founding meeting, OutRage! adopted its mission statement:

OutRage! is a broad based group of queers committed to radical, non-violent direct action and civil disobedience to:

OutRage! was a home-grown British queer rights and direct action movement but activists took their inspiration variously from the suffragettes, the American black civil rights movement and from ACT UP and Queer Nation in the US.

OutRage! was an all-volunteer, non-hierarchical grassroots, democratic movement, with no officers, leaders or paid staff. Weekly meetings were open to any LGBTQ+ person to attend, speak and vote. It was funded entirely by donations from activists and supporters.

OutRage! was the longest surviving grassroots, volunteer LGBTQ+ direct action organisation in the world, lasting for 21 years from 1990 to 2011.

Thousands of brave, determined, inspiring, selfless volunteers contributed to OutRage!’s successes for more than two decades. They, collectively, made an extraordinary positive impact on public attitudes, values, institutions and laws in the UK – and sometimes abroad too, through international campaigns, such as Stop Murder Music.

Peter Tatchell, one of the 30+ founding members and currently Director of the Peter Tatchell Foundation, said: ‘It was a remarkable social movement that mobilised the grassroots LGBTQ+ community on a scale never seen before. Through visual street protests, it secured media coverage and raised public awareness about the enormity of anti-LGBTQ+ discrimination.  We challenged and shamed homophobes everywhere and put the government and public institutions under pressure to change.

‘Our first successful campaign was against police harassment of the LGBTQ+ community. Our demand was ‘policing without prejudice’ and we won major police reforms.
“OutRage! did an average of two non-violent direct action or civil disobedience protests every month. People were willing to get arrested if need be – and many were.
‘The protests were daring, imaginative and often witty, drawing on LGBTQ+ traditions of camp and theatricality.
‘They included the kiss-in, wink-in and turn-in to defy anti-LGBTQ+ laws. We also released condoms in Westminster’s catholic cathedral, attempted a citizen’s arrest of Mugabe, interrupted the Easter Sunday sermon of the Archbishop of Canterbury and made the first bid to overturn the ban on same-sex-marriage, way back in 1992.
‘The six-month-long Equality Now! campaign in 1992 was probably the most sustained equal rights campaign by any marginalised minority community in the history of the UK. Week after week, it targeted every anti-LGBTQ+ law and institution.
‘OutRage! had no paid staff and no funding, apart from what activists and supporters chipped in. It lasted an astonishing 21 years. I cannot think of any all-volunteer direct action group in the world that did so many diverse protests over such a long period.’