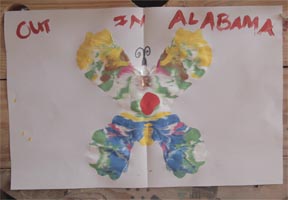 New York-based filmmaker, Bonnie Blue Edwards, originally from Alabama, is making a feature-length documentary, Out In Alabama, about the communities in Alabama where LGBT rights are embraced.

The film aims to provide an intimate view of the people who defy prejudice and to showcase the continued hope and redemption in Alabama, as well as across the globe.

In a recent trip to Alabama to film the promo video, Edwards was accompanied by Jeanette Sears, a cinematographer from Ohio who attended graduate school for filmmaking in NYC. The associate producer on the project is Bren Coombs, a lesbian from Texas who now lives and works in LA. Also on board for the promo video was Tyler Jones, a resident and native of Alabama who co-founded 1504 Pictures. This diverse mix of filmmakers from across the US worked diligently and on a budget of zero dollars to create the teaser, which can now be seen on Kickstarter.

The promo video for Out in Alabama states that the documentary will “turn the stereotype on its head and be an inspiring glimpse into the progressive movements happening within unexpected places. It will celebrate the courageous individuals who are pioneering change while also celebrating the culture of the South.”

Edwards, who says of the film, “It is our goal to share these stories in the hope of inspiring further acceptance of the LGBT community, not only in Alabama, but worldwide, as well as reigniting the universal responsibility for compassion,” got her start in the arts, after studying international business, through the storytelling juggernaut The Moth.

Recently, she worked alongside Oscar-nominated actors and producers on the set of Stealing Cars, an independent feature film scheduled for release in 2015. The executive producer of that film was Mark Wahlberg, and the producer was Rachel Winter—who also produced The Dallas Buyers Club which told the story of an AIDS patient in 1980’s Texas.

Acting as a consultant on the film is Academy Award-winner Cynthia Wade, known for her Cinemax/LOGO short documentary Freeheld, about a dying policewoman fighting to leave her pension to her female life partner. This film is now in production as a major motion picture starring Julianne Moore, Ellen Page, and Zach Galifianakis. Her work has been seen on HBO/Cinemax, PBS, A&E, AMC, The History Channel, LOGO, Oxygen, MTV and Discovery.

To touch on the international impact of the project, Edwards and Coombs arranged Skype recordings of supporters from across the globe—one of which is a resident of North Yorkshire. Edwards was introduced to the UK supporter through the English painter/actor Paul Duncan, who is collaborating as artistic director for the project. Duncan has been living in NYC for ten years, and worked with Edwards as an actor in a 2013 theatre production. Duncan and Edwards plan to collaborate more in the future on UK-based projects.

The filmmakers are currently seeking funds for further development and initial footage essential for launching into production via crowdfunding on Kickstarter, hoping to raise $25,000 by May 22.