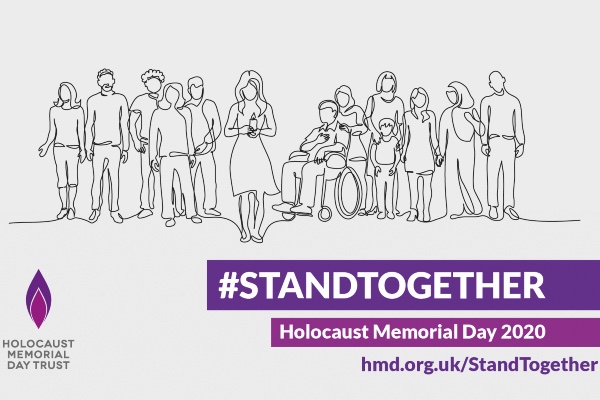 Last week I attended the Holocaust Memorial Day Programme here in Brighton. I recognised, in my reluctance to be there at some deep level of myself my need, my duty to listen, that fear of such horrors lay not too deep within me. My rainbow lapel badge made a visible announcement of my belonging to a vulnerable part of society, as Jewish people wore their own star of David badges of identity, in very different ways at different times and places. In their vast, incomprehensible numbers Jewish people died in death camps, but people like me died there too. So this is not the story of others, it’s my story, our story too.

Bryan Huberman, the son of Alfred Huberman, a witness and survivor of horrors beyond our imagination, read his father’s story of those years in his calm voice, with projected images of the time, identity cards, photos of forced labour camps, death marches, real events in our world not so long ago, above him, to make real what was called the banality of evil. And we watched a short video of his father talking over his sewing machine, a tailor at work at Hannington’s department store here in Brighton. This unobtrusive man had living memories which made the worst of my life seem nothing much at all. How powerful, how real, is direct testimony.

Then Rabbi Samuel de Beck Spitzer a truly great baritone, sang Kaddish, the Hebrew prayer associated with mourning, with such intensity of feeling and heartfelt beauty that tears touched my eyes. Ask not for whom the bell tolls, I thought to myself. We weep for ourselves.There but for the Grace of God go we.

This hour was not just about the Holocaust, but about genocide itself, the root of created fear through stories turned into violence and destruction. So we can learn and not do it again, in big ways or small. In my time there was the genocide in Rwanda, that beautiful country in the mountainous centre of Africa, in 1994. Vivenie Mugunga, one of the original founders of rYico, a UK-based charity that supports vulnerable young people in Rwanda,  told us of the massacres, the neighbour turned on neighbour, another kind of violent horror, with the direct experience of her own family and others. What is it within we humans that can be turned into murderous violence, I wondered. Perhaps this is the most distressing question of all, at least for me; does this lie somewhere in me too?

But don’t think this was an evening of darkness alone, a grim tale with no light. The contrary is the truth. There is something profound and wise that emerged from both of the genocidal testaments, a sadness and warning, but also something of the phoenix, the beauty in the hearts of those who peered into the abyss and rose beyond it. In a small way I have known this in my own life, in the distress of transition, a kind of small death and birth as we all live them in our LGBTQ+ lives, in our human lives. I left that memorial event just knowing that I must take care of every thought I have of others, always act from kindness, as I was not only touched by some profound sadness but also felt bright hope in the goodness of humanity with me in that room.

The evening finished with everyone in the room, from all the diverse communities of the city joining voices to sing Kol Haolam Kulo, a traditional song from Rabbi Nachman of Breslav which teaches that the whole world is a very narrow bridge, and the main thing is to not to fear, to have no fear at all.

Persia West attended the Holocaust Memorial Day event on  behalf of Gscene Magazine. The event was planned by the Brighton & Hove Jewish Community’s Holocaust Education Project with the Rwandan Youth Information Community Organisation and supported by the Communities Team at Brighton & Hove Council.