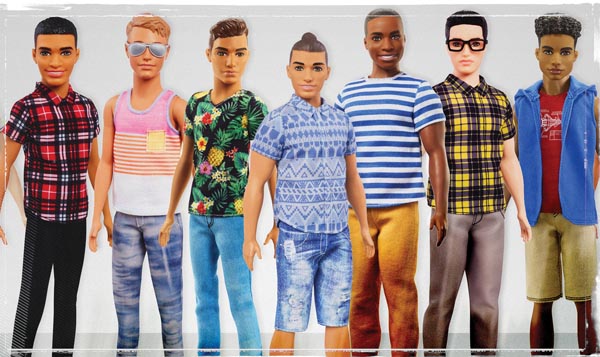 You must be white, cis, straight-acting and ripped or you’re not gay says Lee Henriques.

THOSE are the expectations set upon men in the LGBT+ communities, aren’t they? Our standards of beauty consist solely of whiteness, cisness and stereotypical (AKA toxic and heteronormative) masculinity.

Let’s take the new Queer Eye – a wonderfully campy show starring five fabulous gay men; who does everybody look to as the ‘hunk’? Antoni. Jonathan’s too femme, Karamo and Tan aren’t white, and Bobby’s not ripped. Now, this isn’t to fault men who are white, cis, thin and not particularly feminine (I know I’ve immediately hurt a few fragile egos here, and this isn’t a personal attack on Antoni) but they certainly shouldn’t be held to the extremely high calibre that they are.

The term ‘straight thin, but gay fat’ feeds into the vicious standardised beauty cycle that perpetuates the horrid body dysmorphia and eating disorders among LGBT+ men.

Matthew Todd touches upon this in his book Straight Jacket, explaining that since society doesn’t really accept us, we don’t accept ourselves. This can manifest into unhealthy eating patterns and fixations on our appearance. Research from nationaleatingdisorders.org shows that 42% of reported males with eating disorders identify as gay, an alarming statistic considering the amount of people with disorders that are never reported or seek professional help.

These overly glorified body types with six-packs and obnoxious muscles are tied to the systemic heteronormative ideals imposed on queer men (I’m using queer as an umbrella term to encompass all LGBT+ men). I personally believe this view originates from the outdated idea that if we aren’t feminine, if we’re straight-passing and adhere to the same ridiculously toxic ideals of masculinity that straight men do, then we’ll be safe. Our masculinity won’t be questioned, it’ll be a physical display that even if someone does realise we are gay we are no less of a man.

Continuing on from Todd’s premise, we have doubly the pressure to be accepted by ourselves and by a heteronormative society that pokes fun at men who show any kind of emotion that isn’t anger (queue the disgusting Daily Mail article, written by Tammy Hughes, titled Sniff sniff! Why are so many grown men blubbing like babies on Celebrity Jungle?) In other words, bodybuilding and other kinds of grooming can be a symbol many queer men use to prove their worth and reclaim the masculinity that is dismissed upon coming out of the closet.

But we shouldn’t have to prove anything to anyone, especially obsolete gendered tropes and especially not to each other. All bodies are beautiful. Masculinity is just as attractive as femininity. In fact I’d take the sensitive guy over the repressed, self-hating jock, any day. The whole masc4masc thing needs to stop hiding behind the ‘it’s just my preference’ argument and face the reality that feminine guys making you uncomfortable warrants some self-reflection. Society tells you to value hegemonic masculinity, it’s not a preference if it’s been instilled since birth. And the same goes for whiteness and cisness.

Racism and transphobia within the LGBT+ communities deserve their own respective columns (neé, books), but they boil down to the same issue of beauty standards – we’ve been indoctrinated to believe whiteness and cisnormativity are the end-all be-all of desirability, and their counterparts are seen as less than. Obviously that’s nonsense, but it seems as if you’re not a skinny, white, cisgender manly man you don’t get the same level of recognition or respect as someone who is.

The irony of being part of a marginalised group that marginalises certain members of their community has been an ongoing issue within the LGBT+ communities that often gets swept under the metaphorical rainbow rug. I urge everyone to check out Grindr’s new Kindr campaign, where they address really important issues like sexual racism, body shaming, transphobia, HIV stigma and femme shaming on the app. They’ve changed their community guidelines and are actively starting conversations about these topics that need to be talked about and recognised.

Growing up, my gay role models were far and few between. I looked up to the drag queens on RuPaul’s Drag Race, Troye Sivan on YouTube, TV shows like Faking It and Glee, singers like Olly Alexander from Years & Years. There’s so much more diversity for the gay youth of today to look up to, as more and more role models come out and step up. It baffles me that this rigid thought of ‘traditionally’ attractive queer men somehow still exists.

If the person reading this isn’t white, cis, straight-acting or ripped, I just want you to know that you’re valid. Our communities can often discriminate against people who don’t fit the norm of all these inter-labels we love to place on each other. So instead, let’s celebrate what makes us different, what makes us more interesting than the carbon copy #Instagays. What makes you so much more than your appearance? We often tie our self-worth to our appearance when there’s so much more substance to us than our physicality.

Jameela Jamil created an Instagram-based movement (@i_weigh) for women to look beyond their weight and focus instead on what makes them uniquely them and measure their lives outside of weighing scales. I think we should do the same and love our physicality (in spite of all the possible ‘flaws’ we may have) but not fixate our entire worth on it. I’ll leave you with this: who are you outside of who you appear to be?