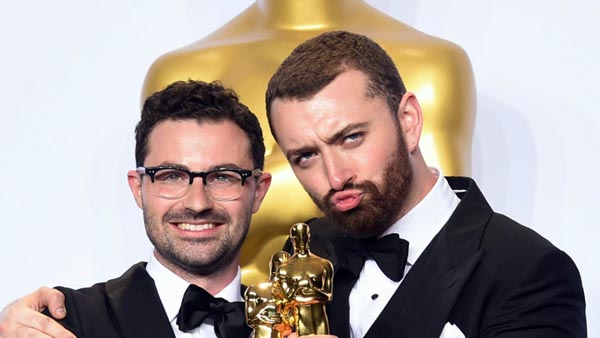 It’s the day after the academy awards and amongst the news that Leonardo DiCaprio had finally won the best actor Oscar, bleating, shady comments and pitchforks in hand were to be seen on Twitter as the gay community were up in arms.

The aim of their anger? Singer and songwriter Sam Smith. Not only were they moaning at Sam for losing weight/being fat/being gay/singing/they were attacking him for being misinformed.

His crime? He got some information wrong during his acceptance speech at the Oscars.

Instead of congratulating the openly out singer on his win, they took to their keyboards and started spurting hate. Some of the things I was reading on Twitter actually shocked me and I couldn’t help but fling my laptop open and start writing this missive as I feel the gays of Twitter have actually missed the point here.

During his acceptance speech, Sam said: “I stand here tonight as a proud gay man and I hope that we can all stand together as equals one day. I read an article a few months ago by Sir Ian McKellen, and he said that no openly gay man had ever won an Oscar. If this is the case, even, if it isn’t the case, I want to dedicate this to the LGBT community all around the world” and while he was actually referring to Sir Ian saying that no openly gay actor had received an Oscar, the gays of Twitter took to their keyboards to instantly slag the young singer off.

Firstly, gay people have won Oscars before, but fine, a possibly glib but forgivable mistake. Secondly they made it personal, attacking him for standing up and being himself as a gay entertainer, noted for his outstanding performance.

Enter Dustin Lance Black, Tom Daley’s fiancé, who decided to join in the Twitter debate and pour petrol over the already substantial flames. Black said: “Hey Sam Smith, if you have no idea who I am, it may be time to stop texting my fiancee” along with the video of his 2009 Oscar acceptance speech for his screenplay of the film Milk. Shady. A few hours later, he added; “THE POINT: knowing our LGBTQ+ history is important. We stand on the shoulders of countless brave men and women who paved the way for us” and while I agree with Tom Daley’s fiancé, I disagree with the way he handled it. As someone who makes shows about history, especially LGBTQ+ history, it’s important that we know our past. It seems many people have forgotten how hard we had to fight to get to this point and openly attacking Sam on his lack of knowledge via Twitter just doesn’t sit right with me.

Surely Dustin Lance Black and Sam Smith should be singing from the same hymn sheet, rather than throwing spears. As an out and proud celebrity, you have a level of duty of care you have to uphold and I’m afraid Black’s Twitter attack was everything but. When LGBTQ+ people in the spotlight are applauded and awarded for something they’ve achieved and, in front of an audience of billions, are comfortable enough to be proud of who they are, why are they being attacked? If we want to overcome homophobia and hatred, how can we start when we have so much smoke within our own camps?

Out and proud celebrities are still not as common as you’d think, even within the world of arts. We should be celebrating that Lance Black won an Oscar two years ago and we should be equally as proud that Sam Smith won an Oscar just last month.

Small things like this make a big global impact, which, might not be obvious to see from behind your Twitter feed. I’m not saying you need to like him, nor like his music but what I’m asking you to do is not attack play the hater card. You can dislike his music, fine. You can dislike him as a person, fine but attacking him on something that is a win for us, as a community, isn’t acceptable and in a world where homophobia is rife, just doesn’t make sense. Our fight needs to be strong and the only way you can be an openly out gay man today is because of the community that kicked, screamed and made a huge noise to just get us the same rights as everyone else.

As Dustin Lance Black said, knowing our LGBTQ+ history is important. It’s important to us as a community but you have to remember that the fight isn’t yet over. We still have mountains to climb and grouping together on Twitter to slag a LGBTQ+ Celebrity off because he dedicated his Oscar to us, a community, is just plain homophobia from inside our own camp. So next time you get behind that keyboard, remember where you came from and that our struggle hasn’t always been plain sailing as you’d like to believe.