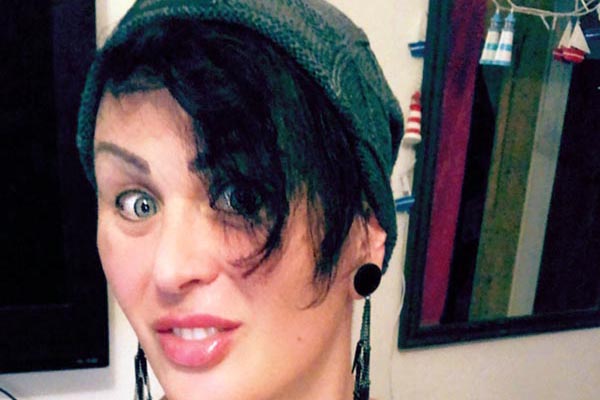 The impossibility of attempting to adhere to cis-normative femininity and beauty standards by Ms Sugar Swan.

AT the very start of transition I felt that I was forced to perform femininity to be taken seriously as a woman. I felt that I had to wear feminine coded clothes, wigs and a lot of make up, more make up than any one woman should wear, before I was able to leave the house. Should I not wear prosthetic breasts, tuck my genitals and ‘make the effort’ to look as feminine as possible then I would be gendered as male?

I was under no impression that I blended into society as a cis woman, I was very clearly a trans woman, but the aim of my performative femininity was to be gendered correctly. This worked to some degree. It was most difficult in those early days to hold my head high when the majority of society looked upon me as a cross-dresser.

As I moved into medical and surgical transition the need to perform femininity began to lessen. Once my transplanted hair started to grow in I was able to stop wearing wigs which helped me feel more authentic in myself. Once laser hair removal freed my face of hair and hormones started to soften my skin I was able to stop wearing heavy make up. This again made me feel more like myself and less like I was putting on a show for the general public, all in a bid to be called ‘Miss’ instead of ‘Mr’ by shop assistants and other such strangers.

The real game changer for me came when I went through facial feminisation surgery and breast implants. Having the bones and soft tissue of my face augmented into a more feminine shape and having bigger breasts than those which hormones blessed upon me bestowed a new feeling of natural femininity, one which I didn’t have to paint on, nor strap on, one which was just there when I woke in the mornings. Having hair after being bald, a smooth face after a full beard, soft feminine facial features after hard, strong masculine ones and large, full breasts after small buds all contributed to me feeling my authentic feminine self.

I had now got to the stage where I didn’t need to wear make up at all to feel feminine and at some indistinguishable point my sense of style and how I dressed had changed. I was finally dressing for myself and my choices in fashion were no longer centred around trying to be gendered correctly by strangers, and this felt great. I still however, experienced gender dysphoria.

I would often be ‘clocked’ as trans by strangers but I was in a fairly good place where I was so happy with my surgical results that I didn’t care. I had to be somewhat realistic. I’m six foot one, I’m broad, and I’ve had 35 years of testosterone running through my system, I couldn’t erase that with a few years of oestrogen and some feminising surgeries.

More than all of this, however, was the underlying knowledge that I still wasn’t done with surgical transition. I still had a penis and subconsciously I foolishly believed that getting rid of it would fix all my problems and I would be transformed into a ‘real woman’. However, at this time I was no longer performing femininity and that felt just great.

My vaginoplasty came and went last year, and quelle surprise, whilst I’m elated by the fact that I now have a vagina, I still suffer dysphoria. This was very much an obvious outcome and one which, of course, I knew would be the reality.

I spent the latter half of last year trying to work out what more I could do to feel more feminine and to pass as cis more often in public. At one point I even contemplated removing my already plentiful breast implants and going for bigger. I considered doubling the size of my lips, pumping more fat into cheeks. I already have a ‘G’ cup chest, large lips and sharp cheekbones from my first set of surgeries. Would having larger breasts really make me feel more feminine and would they help me pass as cisgender more often? No, of course they wouldn’t.

To try and hold myself to cisgender beauty standards is futile. There’s absolutely no way that I can compete in the beauty stakes with cis girls and neither can I turn back the clock to a time when testosterone didn’t masculinise my body. I have to try and accept the fact that I’ve had some good surgical results and that I’m deemed a beautiful woman. I’ve had, what is seen as a successful transition – yet somehow, because I can’t help but compare myself to cis women of my age, I feel less. Less feminine, and less of a woman.

I’m walking a tightrope where if I try too hard to perform femininely I can come across as a parody of a woman and if I don’t bother at all then it could be questioned why I even bothered transitioning at all if I’m not going to ‘make the effort’. Societal beauty standards for women suck and are of course, totally unrealistic for most women, both cis and trans.

I’ve finally come to the realisation that there’s no amount of surgery, make up, fillers, or implants that will make me more passable than I am now and I must try to come to terms with that the best I can. Will I forever be jealous of cis women and trans women who pass better than I? Of course I will, but all I can do is face the mirror each morning and tell myself that I’m the woman I am, and that is okay.