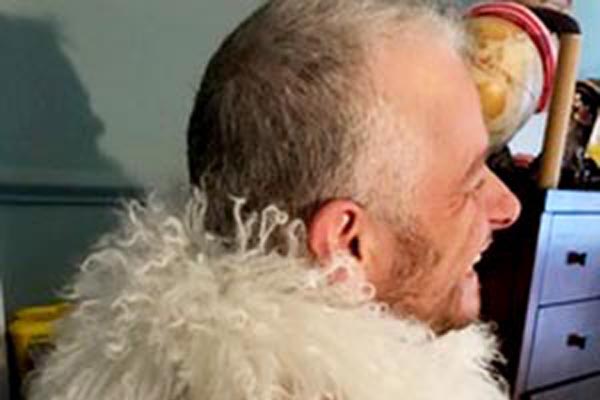 Dr Samuel Hall on the drugs he’s dependent on and how his brain is rewiring itself in his second puberty.

PLEASE forgive my indulgence, since I’ve little to say about chemsex as per last month’s theme, instead I’m exploring the influence of a drug that I’m totally dependent on for both my physical and mental health, and wellbeing. Testosterone.

As I write I’m on enforced convalescence. Who knew that I’d have to be dragged away on holiday? That I’d be reluctant to travel or seek the sun… I was initially reticent because we had to book this break prior to my surgery in February, and I was nervous that I wouldn’t be healed enough to travel, or that some complication would hold me back. But my beloved, who always knows best, persevered, riding roughshod over my protestations to drag me away from gloomy England to a tranquil spot in the mountains nestling above the Costa del Sol, eating local food and dipping my toes and still healing arm into the freezing Mediterranean. What bliss. I know that I’m both extremely lucky and singularly ungrateful – I really don’t deserve to have someone so very much on my side! I’m increasingly becoming a grumpy old man in the eyes of my family and the tide is seemingly unstoppable. And yet I’m blissfully happy.

I’m not sure what it is that makes this juxtaposition possible, but some insight has come over the past few months from my wife. She thinks I have Asperger syndrome. Somewhere on the spectrum of autistic disorders, people with Asperger’s are often very difficult to interact with, being lost in their own intellectual worlds and missing normal social cues, they can be frustratingly literal in speech and interpretation, and find it difficult to express or understand the nuances of relationships. The terminology around the autism spectrum is rapidly changing as neurodiversity is explored and increasingly understood. There is a long way to go, and I’m certainly no expert.

However, reading around the subject a little more, and thinking about my childhood behaviours, as well as questioning my parents, has helped both my long-suffering wife and I to understand why we often miscommunicate, sometimes with great detriment. Of note here is that there’s a well-documented association of autism with gender identity issues. There’s no hint or supposition of causation, but there’s an association which is suspicious. Way more people who identify as trans are on the autism spectrum than one might be led to expect given the prevalence of ASD in the cisgender (non-trans) population. This isn’t a medical journal, so I’m not going to expound theories or present you with statistical evidence here, this is merely an assertion of the little we already know.

What I will say is that this is revelatory to me on a personal level. It’s increasingly recognised that children assigned female at birth (ie, put in the pink box) are harder to diagnose than those assigned male (blue box). But we also know that girls and boys are socialised very differently, and that some of the social skills that girls learn allow them to hide their autistic traits more easily. Much in the same way that adults with autism have often learned to mitigate the impact of their differently-wired brains so that they can and do function effectively in society. Nevertheless, it’s a sad and little known fact that adults with ASD are less likely to be in long-term successful relationships (amongst other things) than those without (so-called ‘neurotypicals’).

Whilst I’m aware that some of the language and expressions I’m using may be outmoded or considered inappropriate to others, this is very much a personal journey, an exploration of my own internal wiring, and a search for answers about my experiences as I have transitioned.

You see all this has become far, far more obvious since I started medical treatment. I believe it’s the testosterone that’s changing my brain and the way I perceive and interact with others. Each stage of my transition (including surgeries to masculinise my body) has been accompanied by an alarming sense of ‘skills lost’, rendering me incapable of doing things I could previously accomplish easily, or even excel at. Over time I’ve been able to regain these lost skills, as I’ve adjusted to the new reality of seeing and being seen as male – but this doesn’t really make sense. Why would a change of fuel, a different hormonal milieu, have such a deleterious effect on my ability to function? The studies haven’t been done of course, but the gender clinicians did warn me that I would enter puberty (admittedly for the second time around, only this time the ‘right’ puberty for me).

Prior to transition I was seen as someone who had empathy, and was able to comfort those in need and provide emotional support to those around me. On testosterone I gradually found myself losing these skills, which, I think, must therefore have been learned, rather than innate. My brain is rewiring itself in this second puberty, and I’m having to relearn how to be with people.

This reinforces the idea that gender is a construct, adhered to by parents, teachers, peers and society in general. The acquisition of empathy and the capacity to relate emotionally is nurtured into us, it’s not ‘nature’. No wonder then, that boys and men are considered less emotionally intelligent (please note these are generalised statements and really not applicable to individuals). Those in the blue box simply don’t stand a chance and cannot compete with those in the pink box, who’ve been carefully tutored into emotional intelligence and care-giving since birth.

Again I generalise here – I appreciate fully that there are many men/boys who are sensitive and gentle with others’ emotions, and plenty of girls /women who are tougher by far. Broadly speaking, what I’m getting at is the notion that neither gender identity nor autism spectrum traits are innate. It’s entirely possible that we’re socialising these problems into our children by placing constraints on them that are both prohibitive and restrictive, and that only a massive change in outlook can alter this state of affairs…
Food for thought at least.