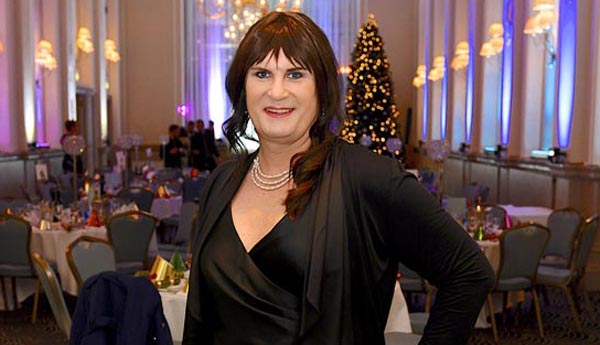 Ahead of Transgender Day of Visibility, broadcaster Sophie Cook explains why the day remains important for trans people all over the world.

Over the past few years transgender visibility has improved greatly with a number of trans people becoming very public through the media – I was even featured on Match of the Day’s Premier League football show recently.

So why do we still need a Transgender Day of Visibility?

Unfortunately that visibility has also brought an increase in abuse and bigotry, following my appearances on the BBC the online trolling I received escalated to the point where I received death threats via Twitter.

The fight for freedom from bigotry isn’t over yet and it won’t be until every trans person can walk down the street, use the toilet of their choosing and express their identity free of fear.

For so many Trans people our overriding aim is to ‘pass’ or to achieve invisibility, to go about our lives as if our transness never existed, we want other people to accept us in our chosen gender without question or judgement.

But is this actually doing us all a disservice?

My self-confidence and self acceptance greatly improved when I let go of the concept of passing. The fear of being ‘read’ and the fear of people discovering that I wasn’t a ‘real’ woman.

That doesn’t mean that I don’t want to be the most beautiful, feminine version of me possible and I do love it when people call me Miss, but I’m not scared of people realising that I’m trans, in fact I’m very open and forthright about it.

In the same way that gay rights and acceptance improved greatly after they stopped hiding in the shadows and stood up to express their Pride is it now time for us to proclaim that we are Trans and proud of it.

Gender dysphoria can be a terrible thing that takes a huge emotional, mental and social toll on people, do those of us that have reached the stage of feeling comfortable with ourselves and our condition owe it to those that are still struggling to show that there is a light at the end of the tunnel?

Do we owe it to ourselves (and our younger, more scared selves) to stand up and fight for our rights to be recognised as valid members of society?

Transphobia seems to be the form of social hatred and bullying that is still, if not accepted, ignored by society. Whilst racism and homophobia are abhorred by all but the very narrow-minded few trans people still get the sniggers, tranny jokes and, as happened to me last week, outright abuse.

We go through hell to finally be our authentic selves and we should be proud of the fact that, even if we haven’t quite won the battle yet, we’re on the road to liberation.

Why, just at your moment of self realisation would you come out of one closet only to lock yourself in another, yet again in fear of being outed.

So perhaps it’s today that we put on our best face, most amazing outfit and strut, proud as hell down our local High Street.

I’m here, I’m Trans and I love who I am, and no ones petty minded bigotry is going to take that away from me!

Sophie is a former RAF engineer, motorbike racer, newspaper editor, football and rock photographer. She is a self harm and suicide survivor and the first transgender newscaster on European terrestrial TV for Brighton’s Latest TV, and is the head of Latest LGBT+ TV, the UK’s first terrestrial LGBT+ TV channel where she hosts Beyond The Rainbow, a weekly LGBT+ news and chat show.

She is the first trans woman to work in the Premier League as club photographer for AFC Bournemouth, she is an ambassador for Kick It Out, patron of Just A Ball Game? and has spoken at Wembley Stadium and the TUC.

Sophie is also a Hate Crime ambassador for Sussex Police and speaks regularly at conferences about LGBT+ issues and consults with a number of major companies about inclusion and diversity.

Transgender Day of Visibility?, celebrated on Friday, March 31, is dedicated to celebrating transgender people and raising awareness of the discrimination they face worldwide.