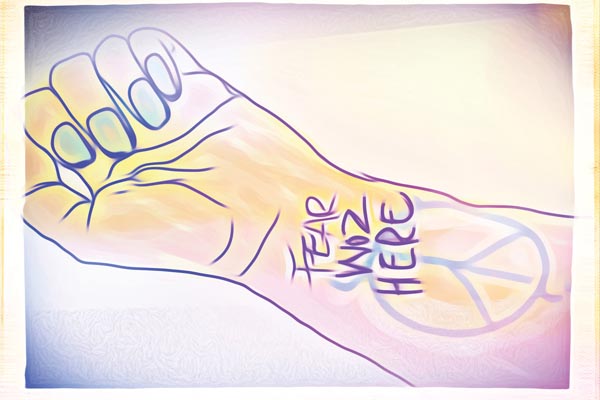 Can your phobia ever really disappear? Asks Ray A-J.

Fear has left me
With battle scars for comfort
A mere memory of a face
That once haunted my brain
Tormented my head
Filled it with worry and dread
Forms the breaks in my skin
There forever
Reminding me to stay away
Despite not feeling the same pain
That scared me stiff
Made me cry, wailing tears
Eyes full of mist,
I still look away,
Feel my mind draw me to safety
Each time a film he has graced
Appears on the screen,
Not from fear
Mind
But from distaste and disfavour
I know, the idea is still there
I don’t like his face, but I’m not scared,
I wouldn’t choose to watch him on-screen
But if by surprise
He appeared in front of me
I wouldn’t run, breakdown, nor cry,
I would merely shake his hand
And say
Once you would scare me,
But not today.

It’s been five whole months since I was released from my fear. Five months since I sat in a room, and relived my harrowing memory of seeing the character Peter Pettigrew, from the Harry Potter series, for the first time. And it’s been the most free five months of my life.

Around five months ago, I experienced a different type of therapy, to free myself of a phobia that I’d suffered from for 13 excruciating years. In order to cast out my consuming fear of the actor Timothy Spawl, and his rat-man character Peter Pettigrew (who I first saw when I was an overly imaginative five-year-old), I had to go through a therapy known as Emotional Freedom Technique.

I had to sit in a room with a life coach, emerge myself in the petrifying memory of that twisted rodent man’s face, feel every urge to run away, and live in that feeling until I could release it from my body forever. It was just an hour of my life, and yet it felt like it had saved the rest of it from constant terror. But, despite the relief of my phobia being left at the door of that room, five months later, I still can’t forget my fear. Not entirely.

It was a Friday night, and I’d just got back from a show. Before the therapy, I’d have been terrified by the darkness that surrounded me as I walked home. But not now. For once I was able to waltz through the dark streets without suddenly seeing that rat’s face in every little thing I passed. I didn’t have to twist and turn, and look over my shoulder in case he was there behind me. It was a relief.

As I approached the door of my house, I felt a burning sense of courage shoot through me. For months after my Emotional Freedom Technique therapy, I found I could actually walk through the halls, the rooms, in the dark without the constant fear of Peter Pettigrew being in every corner. The courage only burned brighter as I walked through my house and over to the TV. I hadn’t had to over-analyse each and every show or film, always waiting for the moment that a rat-faced character would appear every time I was met with a TV, in five months. It was great.

So I flipped the TV on, and who was on the screen blaring out right in front of me? Timothy Spawl.

As it happened, the film The King’s Speech was on TV that night. And, as my mum walked into the living room where the TV was screaming the image of Timothy Spawl (he was playing Winston Churchill), she let out the singular word that used to amplify my fears: “Oh!”

Before the therapy, that word coupled with the look of concern that clung to her face would have instantly enhanced my fear. The fact that she was worried, and thought I’d need support, used to make my scared mind think there was a real reason to fear for my life. If she was concerned, there must be something to worry about.

But this time was different. My body, as if out of habit, desperately clawed at my memories, trying to pull up my trigger and start the panic attacks that used to plague me. Yet nothing could be found. I felt nothing. There was no memory to call upon, no feeling of fear. All my body was met with was a blunt nothingness. I wasn’t scared. My mum looked at me astounded by my lack of response.

“Do you think you’d be able to watch the film, if he’s in it?” she asked. If I wasn’t scared, then I could watch the film, surely? There would be no threat holding me back. And yet, something was blocking me from watching that film. It was as if my reflexes had kicked in, shouting in my ear not to watch it if I didn’t have to. I wasn’t scared, but I knew I didn’t like his face still. I knew I didn’t want to see his face, especially if I didn’t have to.

My fear had left me with a dull scar, not a bleeding wound, but something that subtly reminds me of the terror I once had. It doesn’t burn, it doesn’t hurt, but this empty blemish has become a souvenir of sorts to remind me that, if I can get over the worst fear I have ever had, I can do anything. And if I ever was to meet the source of all the panic and terror that had poisoned me, I truly think I’d be okay. So the effect of a phobia can disappear, but you’ll never truly forget the fact that you once had it.