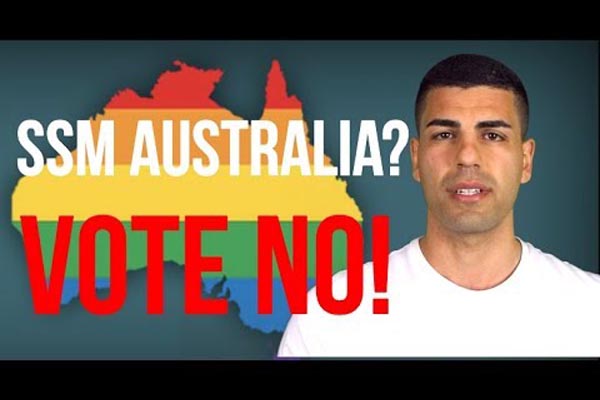 I have taken my time to respond to the post above, because I wanted to research its authenticity myself before committing an opinion. The screenshot below was posted in Australia by Richard Wolstencroft, in response to the same-sex marriage vote.

He has since taken his post down, along with a later post correcting the misunderstanding of his original efforts. I do not believe I have misunderstood. Here goes.

Some, I know, would argue that to respond to this gives credit and audience, and that we should ignore such rants. I disagree. Whilst I believe his words to be inflammatory and deliberately provocative, I shall not rant although I am enraged. I also have a responsibility to speak out for my community when it is attacked. I also take my responsibilities to my husband and my gay friends too seriously to ignore it. What I also say now, is for my six nephews and nieces who will be exposed to such opinions and whilst growing and learning may sit quietly by not knowing if they could or should respond. You can, and you must.

Richard Wolstencroft is a film maker and festival director. He runs the Melbourne underground film festival in Australia. His post is well thought out, considered, perhaps hastily publicly shared and now deleted, but intelligent in his choice of words, arguments and social analysis. That is what makes it terrifying and ultimately dangerous.

I understand the concerns of the rise of what Mr. Wolstencroft calls the liberal elite, but the support of same-sex marriage should not be one of them. In short, he is wrong. Totally, completely and utterly wrong.

Giving someone the opportunity to marry, is neither degenerate nor decadent. It is after all an opportunity to legally recognise an existing or future relationship not an instruction or compulsion to throw an unaffordable party. To in any way criticise a community for being afforded the rights Mr. Wolstencroft has spent his life being entitled to, is at best petulant, at worst following in the political stumbles of a man called Donald. It is not the politics of the liberal elite we should fear now, they brought us to this point. What requires action are the toxic lies reported herein.

Neither the nation nor the family are under attack by the normalisation of so-called degenerates. Gay people are not degenerate because they are not sexually attracted to the opposite gender. They are also not normal, or perhaps more accurately ‘the norm’ although they have bought in to a normalisation of relationship recognition, if they want to. Some, as is true of the heterosexual community, will not bother. This issue is about choice and equality of opportunity.

This decision to allow same-sex marriage strengthens the family and therefore the nation. It also validates anyone feeling abnormal or on the edges of society, because of their orientation.

Mr. Wolstencroft’s reaction is that of a spoilt child who realises at his seventh birthday party that all the children will get cake, not just the little boy whose name adorns the iced top. Mr. Wolstencroft seems to hold an inconceivable desire to play out the role of Augustus Gloop, when it is Charlie Bucket who will inherit the factory. He may be intelligent, he may curate an edgy festival, he may be articulate and controversial. He is also, absolutely, a complete moron.

There is much to be offended by in Mr. Wolstencroft’s original post, including the idea that the gay community’s politics are being weaponised by globalists. Relationships are personal, formed from the perspective of individuals who come together to form partnerships. If gay people are empowered by equality, if their right to marry, not the actions, instills confidence in the previously maligned, then my heart sings for the future.

The gay people I know, are kind, warm, reflective, gregarious, intelligent, loving, amusing, thoughtful, patient, sharing, selfless, strong and determined. If these characteristics are to be embraced by the new world order, then I look forward to the future laid out for our children, my brother’s children and the children of the brother of my husband.

If these are the characteristics Mr. Wolstencroft states we should fight back against, then we must fight too. Fight with firm, confident and resolute determination that we are right to feel the way we do, and right to celebrate and publicly share our ability to love another human, irrespective of the formerly accepted norm.

And finally to the most offensive aspect of Mr. Wolstencroft’s post. “Homosexuality is often created through child abuse”. You are wrong. And it is this lie which confirms both your moronic status and your dangerous lie.

I am a homosexual. I have not been abused as a child. Neither physically, emotionally nor sexually. I am gay because I am. It is because it is. My gay-ness is as much a product of the roll of the genetic dice as is my beard grows ginger. I don’t know where it came from, but I am pleased that it is there although not everyone will be. Child abuse is a criminal activity and devastating for its victims. Homosexuality is neither, nor are we victims. If any gay person has been a victim of abuse, your sexuality is unrelated. Horrible but unrelated. Believe it and don’t let the morons tell you otherwise.

You are also magnificent. It is this magnificence the likes of Mr. Wolstencroft fear. Magnificent and gay, gay magnificence. Fear us if you wish, but it is better to embrace us. For we are today and better still, we will be tomorrow.