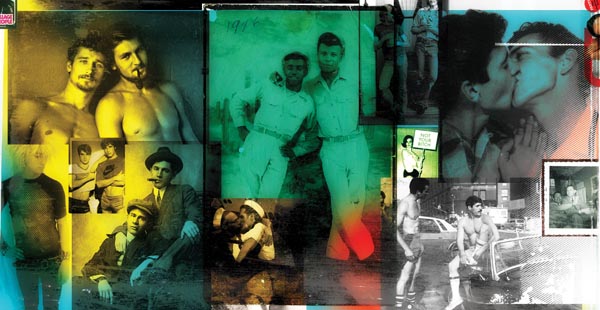 2017 begins inauspiciously for the international LGBT+ community. As the inauguration of the US President Elect looms, even those parts of the world whom in recent years have made significant parallel political and social progress, face an ominous future as rumours of rolled back legislation abound.

In the UK we have a Conservative Government led by a Prime Minister who publicly supports the LGBT+ community on YouTube and yet progress so recent seems fragile when resting upon such fresh foundations, foundations that the same Prime Minister voted against in opposition.

Sceptical? Think of the arguments around PrEP. Would the right of centre pundits and enraged from Esher take to the airwaves with essentially their ‘die bitch it’s your own fault’ message if HIV/AIDS concerned cock-rot that largely affected the male heterosexual community?

And in this, the 50th anniversary of the decriminalisation of homosexuality, note the celebrity-driven social media responses to the football abuse scandal, the immediate comparison of an abusive sex-offender to the homosexual or ‘queer’. Let us not underestimate the immediacy and casual connection of the paedophile with the gay-man.

Let’s face it; it’s the sex that kept us down for so long. Men engaging in physical sexual contact with one another were committing a crime, buggery a sin, a social taboo and men that like doing it? Perverts, certainly not real men.

Think about it, the bottom shaming that takes place within our own kind, in peer groups, relationships, on dating apps (dating, who are we kidding, shag shopping), I’m gay but at least I’m not a receiver – the batty boy who takes it up the shitter is a less of a man than the rest of us, them, you.

And why? Misogyny. That’s right. Misogyny. Young man you’re too girlie girlie, and no man wants to be a girl. Women are bitches, subservient sl*ts, slags. Negative slurs associated with a sexual practice of reception and god-forbid enjoyment, whereas ‘real’ men relax within the lyrical association of a well-bred retired race-horse, now scattering his perfect seed to populate next year’s Grand National with some fierce competition. But one who apparently is a vessel for f***ing not to mention fertility, is a lesser mortal in even the most self-described civilised societies on the planet. Our problem as an international community of mankind is that we just don’t like women. At best, they are tolerated but not on an equal footing.

We are taught in scripture soaked schooling, and do not tell me that the Bible was written by God, because it wasn’t, Bible stores written by men that the pains that women endure are the fault of the first woman. Woman who was allowed to exist because God took a rib from Adam and formed Eve, and then Eve, the silly cow, wouldn’t listen to Adam and buggered off with the serpent for a bit of how’s your father or to use a biblical metaphor, took a bite from the apple. Either way, this was the beginning of the fall of man, and it’s the woman we should blame. And therefore men who lie with man as with woman – nasty people at the bottom of the pile and never trust a man on the bottom, in the bottom, as a bottom, oh look – whenever you see a bottom, just kill him and then blame Eve.

Of course in a parallel universe, we could consider Adam to be an also ran. Had it not been for Eve, Adam’s tale would be an intolerably dull one and would never have been committed to parchment, the true central protagonist, Eve. In short, without woman, the creation of the world would not be.

However, history tells us that patriarchal dominance remains. The Trump card – man wins. Of course the greatest deception inflicted upon womankind by men is to encourage them to hate one another. Remember the two finalists in the race to be the next Prime Minister, where one woman suggested she would be a better candidate for political office as the other woman had been unable to have children?

Nasty. The public tearing apart of pretty much everything Hillary Clinton has ever done or had to say, by women who agreed that pussy grabbing was just banter but who send emails from the home computer worthy of a prison term.

And so to this our first magazine edition of 2017 themed around our gay male icons; I could list them, and garble on about why these men are to be considered the movers and shakers of our modern times, but the gay men that I find really iconic? I know them personally. They are my loves, my friends, my husband, my neighbours, the regular gay guys who are (mostly) my age and have survived all the shit. The state-sponsored homophobia, the sluggish but final changes to legislation, the bullying, the beatings, the ignorance, the being laughed at and humiliated. And you know who really understands? The women because they’ve had it all too. And when your own community mocks you because you prefer to take it than give, yep, they’ve had that too, mocked by their own sisterhood for being the ‘other’ type of woman.

And lest we forget boys, in the dark days of AIDS when the gay men were either dying or falling apart under the horror of it all, it was the women who stepped in. The women who set up support groups, who counselled our grieving gay asses, organised helplines and peopled them with their mates so that we might survive. Women who took the time to care, who knew that dismissal felt like a rusty arrow in the gut and did what they could to take that pain away from us, the gay men – potentially a dying breed.

Surely a part of our gay history to be celebrated, but alas no; instead of high fiving our lesbian sisters, who in many cases quite literally saved our lives, we erased their heroics from our minds, memories and gay-male-orientated history books.

So the next time you’re nasty to a woman, for no other reason than that she doesn’t have a penis, remember bitch, you’re just a homo.