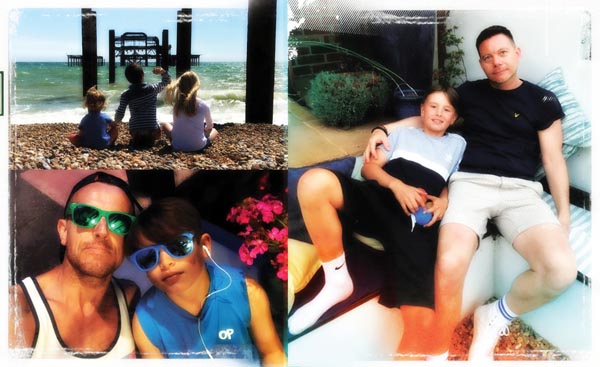 Child’s Play. Or the exhausted Funcle, by Craig Hanlon-Smith @craigscontinuum

Within almost a month of meeting my then boyfriend, now husband, he became an uncle for the first time. I remember receiving the text from him, which screamed in capital letters; I AM AN UNCLE. My automatic, and I concede extremely unattractive response, was one of searing jealousy. I had, until this moment in life, managed to avoid boyfriends worth any mention (because if you don’t ‘feel’ it why bother, right?) but this one was serious and I did not intend to compete for him with a frickin’ baby.

A few days later we both met baby Ryan. It was an intense affair as this was also the first time I had met the tiddler’s parents too – the boyfriend’s brother and long-term partner. This is where I should poetically write something beautiful about the joy of a baby child and the love that leapt from my chest, but I really didn’t feel anything then. Now, yes, but then no. He was just somebody else’s baby. And let’s be honest, except for immediate family (and I was the new boy remember), newborn babies are a bit rubbish – they don’t even do anything.

Time changes the cynic, I quickly became a member of the family establishment and as baby Ryan grew, we began to spend more and more time with him and he was a joy. The hilarity of his obsessive dancing to Kylie’s Can’t Get You Out of My Head and our marching him all the way home from Brighton seafront teaching him Beyoncé’s Crazy In Love – of course.

Our gratuitous present buying, which included an electric car we used to parade him up and down the seafront in. Filming his birthday present opening ceremony on behalf of the family and narrating to my future husband how awful most of the presents were compared to ours, not realising there was a built-in microphone in the camera which played back on the home-DVD. Rookie-Uncle error. There would be others.

Seventeen years later and baby Ryan has just passed his driving theory test and has graduated from an electric car to the real deal. What’s more, there are now a total of six offspring between our shared families, three from each end, four nephews, two nieces and every one has been a delight to have in our home.

Even when crayoning the table, pouring shower water through the ceiling and light fittings below, and my all time favourite (the individual shall remain nameless) when nearing the end of potty training and following my exact instruction to take the nappy off and have a proper pee, the little angel promptly weed against the wall and decorated my Laura Ashley wallpaper. You may think I had a hysterical gay moment at the time, but actually I laughed. He was, after all, just following an instruction. To the letter. Shame the little bugger’s never followed one since.

In our days of growing acceptance and familial integration, much is being made of the gay-Uncle or ‘Guncle’, and what is the Auntie equivalent? A ‘Guntie’ ? I prefer Funcle, which an acquaintance shared with me recently. But in reality, we’re just Aunts and Uncles who happen to be gay – is that really special?

It may have helped our brood of borrowed Von-Trapps that we do not have children of our own, so that when they visit, they are the absolute focus of our planned activities and consequently feel special. Each band of three has only ever had to compete with one another for our attention, not one another and another set to boot. It is also not every day, and so the visits are occasions and marked as such.

And so the Guncles make the effort to get up on Saturdays and Sundays at 05:30 for early morning baking, painting, and Twister sessions. (I’m being kind, one of us did, in fact we used to knead bread dough to the rhythm of Uncle Keith still snoring). To rotate the activities every 15 minutes so that the kiddiewiddiewinkies don’t bore easily. To quickly learn that anything brightly coloured and liquid in form should not go into the child’s digestive system after midday if anyone wants any sleep that weekend. To learn that you cannot go onto the pier with a budget, because if the tiddler sees it, it’s easier to just go with it and say yes. To kick yourself for not realising candyfloss has the same effect as brightly coloured liquid and you gave it to them at 4pm. To enthuse about terrible films and pretend how great they are so as not to bruise their enthusiasm (even if you hated Street Dance 4 – who knew there was a 1, 2 & 3?), to visit every play park within a three-mile radius of the house. To exhaust them with races, treks, games, camel rides (I am the camel), to wonder amidst the 30, now 40-something exhaustion, why they are never seemingly exhausted. As they grow, to rifle through their bags for missing hair-wax and mobile phone chargers but to love them when they convince you they had no idea how it got there. To race upstairs to the tantrumtastic five-year-old who has strewn your books and cosmetics across the room and when you ask what on earth is going on, not lose your head when he tells you it was a mouse. A mouse. A frickin’ mouse. And now to be slightly disappointed at the lie-ins they have inherited from my husband. Although coffee in silence – who knew it held such beauty. And to be secretly thrilled as you over hear one of them say to your brother: “You’re funny Dad, but Uncle Craig is funnier” BOOM!

And this is where I finish with another seemingly poetic moment about how the joy is all mine and I never want anything in return, I did it with love. Uh-uh. If anyone of those six reads this, let me tell you how this inheritance thing works. In the words of our lady Britney Spears: You better work b*tch. I changed your nappies for years and dealt with everything that went with it. Me. I did it. So in 40 years time, you’re changing mine kids. Twister. 05:30am. Just saying.