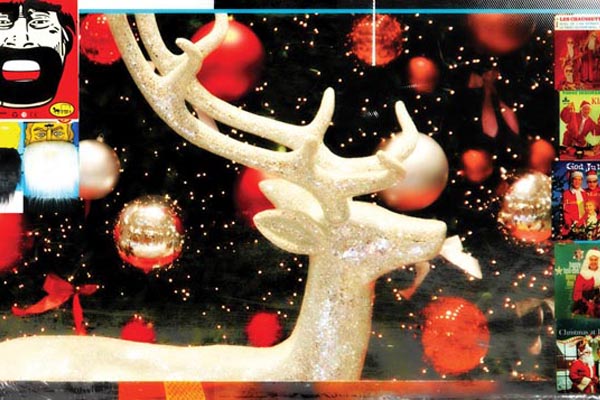 A Christmas Tale or Baby Jesus Will Save Us (again) by Craig Hanlon-Smith @craigscontinuum.

And lo, as another seasonal winter of good cheer loomed ahead like a Nazarean census, Joseph and his Mary set out once more on their quest to deliver the son of God to save mankind. Salvation would come in the form of a donkey, a few worried sheep and ultimately by womb-dropping a baby into an unremarkable feeding trough, hidden in the corner of a derelict shed.

If that was the master plan, is it any wonder we’re all in the shit? However, it is not for us to argue on the origins of an internationally-renowned religion, and besides who doesn’t get their cockles warmed by the tale of Baby Jesus, or at least the John Lewis Christmas ad?

It had been a funny old year for our disillusioned yet once hopeful couple. Joseph, never the centre of the attention, was resigned to Mary’s so-called immaculate conception because although he had restrained himself nightly, it turns out every bugger in the Palace of Westminster or perhaps Hollywood had probably had a turn, and so Mary’s not being with child would have been the real Christmas miracle.

In order to protect Mary’s honour, they invented some shit about the angel of the Lord visiting in the dead of night, and as Catholic Priests with loose cassocks had been getting away with it in children’s homes for years, billions, yes billions, fell for it.

Mary might have told her story to a local media outlet, but in those days by the time the palava had been etched onto some ancient parchment, the populace had swiftly moved on, and were now more concerned with which remote island King Herod was shoving his stash of bitcoin. And so, our Mary’s needs once again pushed to the side, she accepted her lot, straddled the Christmas mule and set out upon the dusty road as per usual. The story was, after all, probably bollocks.

Their odyssey was no longer the smooth ride it had been in previous tellings of the Christmas story. Our heroes were both dark of skin, and the face of Joseph half disguised behind a heavy-set beard. And whilst facial hair would have made Joseph a real man and considerably more attractive to a wider range of homosexuals on Instagram, in reality it meant that stupid people could shout “Muslim Go Home” whilst frightening yet equally idiotic folk, with money and a shudder of global authority, could shove him in a detention centre whilst the local Judiciary argued the toss as to whether or not he should travel internationally ever again. “If only the world had a Baby Jesus to sort this mess out,” he thought to himself as he direct messaged a picture of his penis to 375 followers, only six of whom replied.

As Joseph and his Mary trekked through the land of Judea, they had a strange feeling that they might be heading in the wrong direction, as they met hoards of people leaving. This seemed strange to them as these were skilled house-builders, carpenters, inn-keepers and local health-care workers, but as our protagonists arrived in their homeland, all became clear.

The local officials were carving up great segments of the green and pleasant land, shovelling it into wheelbarrows or whatever the BC equivalent was, and hunkering down in lonely corners, barricaded into isolation behind great mounds of pointless earth, waving a crumpled disintegrating flag whilst whistling a discordant national anthem and dressed up in the faded costumes of Dad’s Army. And although some were convinced they were to make their tiny separatist corner of Christendom great again, Joseph and his Mary didn’t even bother attempting to book into a local hostelry, there was after all undoubtedly no room, and headed straight for the stable with the pigs and ducks.
Shepherds in the field, expecting a whole and holy host of angels to illuminate the night’s sky and proclaim the birth of the Christ child, were disappointed to be met with hundreds of headless chickens leaping from cloud to cloud whilst screaming, and yet saying, well, not very much at all.

Meanwhile, nestled amongst the piggies, Joseph and his Mary had finally given birth to their saviour and awaited the arrival of the wise men. They waited, and they waited, and still they waited but no wise men appeared. “Christ alive!” wailed an exasperated Mary, “I thought we’d find at least three wise men in the centre of the known world.” But what our protagonists would soon discover was that not only were their community leaders not wise, they actually appeared not to know what the f**k they were doing at all.

Even King Herod was not consistent with his  Christmas story duties. Oh he did threaten to kill all of the first-born within the Kingdom of Judea, and ‘to totally destroy Pyongyang’, although as most assumed this was bravado regarding an unpleasant sex act performed upon a Taiwanese prostitute, no-one took it seriously. Besides, he was too busy teeing off at hole number 12 to get his shit together.

Had Jesus himself at this point not been such a baby, he may have led his own revolution, inspired a few million people to follow him, at least on twitter, or perhaps suggested a second referendum, but as recent elections had suggested that democracy was clearly a terrible idea and that the public should no longer be allowed near a polling station, no one really would have bought into that one.