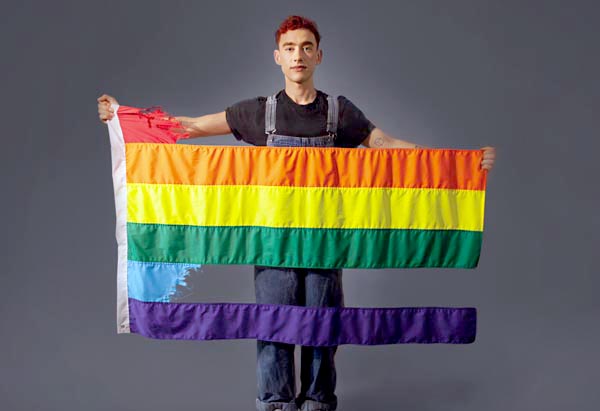 Released in conjunction with World Suicide Prevention Day 2018 on Monday, September 10, The Flag We Shouldn’t Be Proud Of is a short film that seeks to raise awareness of the harrowing statistics surrounding mental health amongst LGBT+ youth.

Two in six LGBT+ youth are at risk of taking their own lives due to issues surrounding shame, bullying, stigma, discrimination, dysphoria, anxiety and depression.

The centrepiece of this short film is a version of the iconic pride flag but with 2 out of the 6 colourful stripes missing – hitting home this startling and poignant statistic.

As the oldest LGBT+ helpline in the UK, Switchboard has a long history in listening to and being an essential lifeline to LGBT+ people up and down the country. We are extremely proud to be a part of this project.

Fronting the campaign, Olly Alexander said: “There’s such a stigma around mental health that stops us from speaking out. In the workplace, in education, or even at home, it can feel difficult to express what you’re going through in the first place. Tackling that stigma is one part of it. I also think we have to have the actual services and provisions for LGBT+ people, because they are quite slim on the ground. The things that we can do to help that situation is to be on our local representatives so they are not defunding or shutting them down.”

Mayor of London, Sadiq Khan added: “I’m proud that London is a symbol of diversity and progress, but we know too many young LGBTQ Londoners experience poor mental health and discrimination. We need to do much more and I’m delighted to back Gay Times in trying to raise awareness of LGBTQ youth suicide. The wellbeing of our young Londoners is vital if we are to build a healthy future for our capital, and I’m determined that all communities feel able to speak openly about their mental health and access the support they need.”

Editor of Gay Times, William Connolly said: “As we know, issues surrounding mental health affect LGBTQ people disproportionately, and World Suicide Prevention Day is an opportunity for us to reflect on the vast work that still needs to be done within the communities. We need to bring a heightened sense of urgency to our approach to mental health so that LGBT+ people everywhere can live their lives happily and freely, without fear or oppression.”