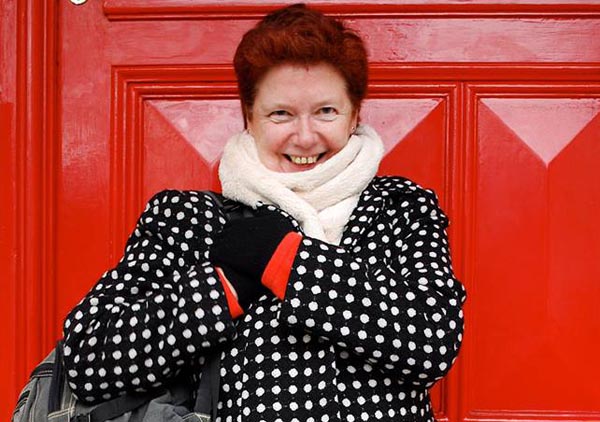 My long-standing friend and former partner Sheila McWattie, who has died suddenly and painlessly from a brain aneurism, aged 58, was driven by her passion for people, her love of language and storytelling and her lesbian feminist politics.

SHEILA thrived on making a positive difference and her journey is landmarked with much evidence of this.

Born in Paisley, to Dorothy and Jim McWattie, Sheila was a passionate and proud Scot. Recently she instigated a gathering of Scottish friends on the eve of the Scottish referendum, arriving at our home, complete with a pot of heather, a tin of shortbread, and of course sharp, intelligent insights in to the pros and cons of becoming independent.

Sheila returned regularly to spend time with her mum in Dunoon and friends in both Paisley and Glasgow and regarded the Isle of Skye, where she’d spent time as a young woman, as her spiritual home, and where, at her request, her ashes will be scattered.

Attending John Neilson secondary school, Sheila excelled in English and demonstrated an obvious gift for languages, whilst her friends teased her, gently calling her ‘Swottie McWattie’ but she just laughed and studied some more.

She was never a straight-laced intellectual though, rather a rebellious teen growing up in the 1960s who smoked behind the bus shelter and occasionally skipped school to lie in the park with her best friend Fiona and plan their next adventure. She sat in cafés with friends after school, putting the world to right, and she and her dad argued endlessly about Labour Party politics. Her candlelit bedroom always echoed to the sounds of Bob Dylan and Leonard Cohen, with a waft of incense in the air.

Sheila grew into a keen wordsmith: never mincing her words, often breaking silences and holding court at parties with fabulous stories, always textured with her keen gifts of observation and humour.

A great and avid writer, she kept a journal for almost five decades, generated reams of quality poetry and accomplished a novel, Ted, as yet unpublished.

Her sister Jill recalls, how as kids, every weekend when they set their off for their caravan at the seaside in Croy Bay in Ayrshire, Sheila would always be loading up the car with piles of books, pens and notebooks to take with her, later capturing the adventures of the day, in her journal, by torchlight, under the blankets. Her early days spent in her much loved Isle of Skye found her with friends, sharing a passion for socialism, often churning out copies of The West Highland Free Press, in a caravan, through the night.

Most recently, Sheila was a highly respected freelance sub-editor and feature-writer at William Reed Business Media and, through her empathy, had the keen ability to get to the heart of what people were trying to communicate whilst maintaining sharp attention to detail of language.

She achieved an MA in Creative Writing at Sussex University and many people in the community of Brighton and Hove benefitted as a result: Sheila worked till her death as a creative writing tutor, latterly at Creative Future and in previous years at Brighton Women’s Centre (BWC), and Brighton & Hove Unemployed Workers Centre and is remembered by many as a woman who made writing accessible to people, particularly to those for whom school/formal education hadn’t “worked”, or those who felt they “weren’t creative”.

She worked in the field of Housing for many years in Edinburgh, London and Brighton supporting mostly single homeless women, in to safer, more secure accommodation, always going the extra mile, always working hard for social justice, with warmth and kindness.

When Sheila arrived in Brighton in 1996, it took a while for her to get used to the fact that this LGBT Nirvana seemed so much less diverse and accepting than she’d anticipated. She went on to meet other lesbians who felt similarly isolated and in true McWattie fashion, reflected on what she could do to bring about positive change: she became a volunteer at BWC and significantly contributed to making it a safe and often creative space for women to meet.

In 2000 Sheila studied journalism and it suited her activist instincts to acquire the tools to communicate effectively with the press, thus getting BWC more clearly on the map. Sheila chaired Brighton & Hove International Women’s Day (IWD) group for four years, keeping women’s issues alive and to the fore; with a committee of local women, she helped co-ordinate Pride Women’s Performance Tent, with Nicky Mitchell and Al Start, showcasing a diverse range of women performers and offering a comfortable space for women to gather on the day. It feels absolutely fitting that the Pride Committee have announced their plan, since Sheila’s death, to dedicate the women’s tent to her and it will now be known as The Sheila McWattie Tent.

Travelling was always on Sheila’s radar and her tales always a joy to listen to: meeting a soul mate Lesley in 1974 in Brussels at an international folk club and their hitch-hiking trip from Rotterdam, through Germany, Austria, Italy, Yugoslavia and France, with no tent pegs for their tent; Lesbos in the early eighties where a hotbed of lesbians gathered living and loving in benders on the beach impressed young baby dykes like me; her appreciation of the stillness of her friend’s beautiful garden in France, the wildness of Orkney when she visited Fiona and the thrill of her epic train adventure across America are vivid in my mind.

Her sister Jill said, “Sheila had the marvelous gift of finding a common interest with people and finding the value in the simplest of things: from the antique dolly she bought on eBay for her great niece Emmi, which she was planning to sew clothes for, to her friendship with Rupert the Whippet, to the Christmas party in mum’s village in Scotland where she took photos of the women doing the Hokey Cokey.”

Sheila invested a lot in her relationships, loving her family and friends in an everyday tangible way and was so proud of her nephews, Steven, Kyle and Ryan and held her mum Dorothy, her sister Jill and brother in law Alan in a very special place in her heart. Sadly, she did not get to meet her great niece Emmi but was so thrilled at her birth and very much looking forward to getting to know her.

In her friendships she was ever seeking expansiveness and authenticity, was often challenging in her honesty, abundant in the gifts she gave, including her fierce loyality, generous spirit, integrity, brilliant sense of humour, her ability to push boundaries and skill at being present, her keen listening ear, wisdom of the crone and playfulness of the child. Sheila was a woman who offered space, reassurance, and kindness, which helped make a difference for so many of us.

Sheila recognised vulnerability as a strength and when over the last few years she bravely faced the challenges of cancer, was quietly confident in asking  for and receiving help from her family and friends.

Sheila also enjoyed her own company, a spiritual woman who, in her quieter moments, tended enthusiastically to her myriad of plants growing on her teeny balcony, sat sipping chai at her kitchen window, appreciating the changing of the seasons, meditated and chanted at the local Buddhist Centre, took delight in raindrops running down her window pane, and regularly walked to St Ann’s Well Gardens to sit on a bench and marvel at the big sky or the sparkling sun-kissed sea.

Sheila was a brilliant communicator, networker, weaver of people and as her wonderful ceremony to celebrate her life proved, even in death, as in life, Sheila brought old friends together, sparked new connections, caressed old wounds and reminded us all that life is precious, as we carried her in, to the pipers playing The Skye Boat Song.