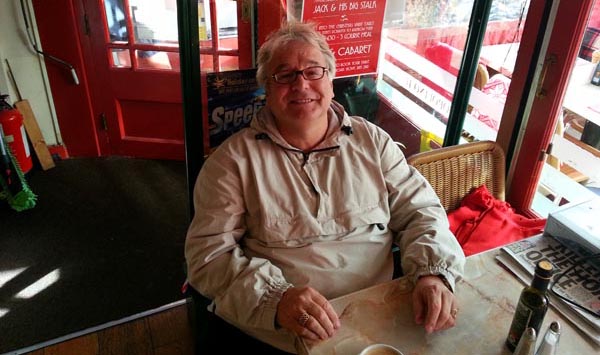 I never imagined I would be sitting here writing about the life and death of my friend Brian Ralph a.k.a. Vera.

IT came as an awful shock receiving a phone call asking for the name of Brian’s next of kin. It was unreal. Vera was dead!

I thought, it can’t be true that the outgoing, larger-than-life, sometimes outrageous pain in the arse and irascible camp old queen who at times drove me round the bend was gone, dead, no… never!

Of course, as I and the many people who shared his life now know it was true.

Brian was found dead in his hotel while on holiday in Hurghada, Egypt on the morning of March 10. He died from a heart attack.

Brian, one of six children was immensely proud of being Brighton born and bred. His father was a rag and bone man and his mother worked for a fish monger.

During his seventy years, Brian worked as an impresario, and was famous for promoting Dorothy Squires’ last show ever at the Brighton Dome on March 17, 1990.

He served on the Royal Fleet Auxiliary ship, HMS Engadine during the Falklands conflict in 1982 and supplied munitions during the first Gulf War.

He promoted cabaret all over the South of England, was a sandwich shop owner, a popular taxi driver and somehow found time to stand as a councillor at local elections for both the Labour Party and the Liberal Democrats. He stood as an Independent at the last local elections in 2010. At different times he also sat on the Brighton Pride committee.

I hadn’t seen him for a number of years when 14 years ago I had a phone call from him asking me if I would write direct and appear in the Adult Panto here in Brighton at the Pavilion Theatre. I thought about it for three seconds before saying yes. The rest as they say is history.

Brian had a big heart and raised tens of thousands of pounds for local and national charities with the help of his many showbiz friends including June Brown and Chris Ellison who both attended his funeral, Polly Perkins, Laila Morse, Michael Jayston and of course the cast past and present of the Adult Panto.

Brian will be sorely missed by his brothers and sisters Phyllis, Rodney, Alan and Julie, his wider gay family and friends and for us, his panto family the show will go on.

In 2012 he paid an emotional visit back to the Falklands, 30 years after the conflict to remember those who lost their lives serving Queen and country.

God bless you Brian and rest in peace.