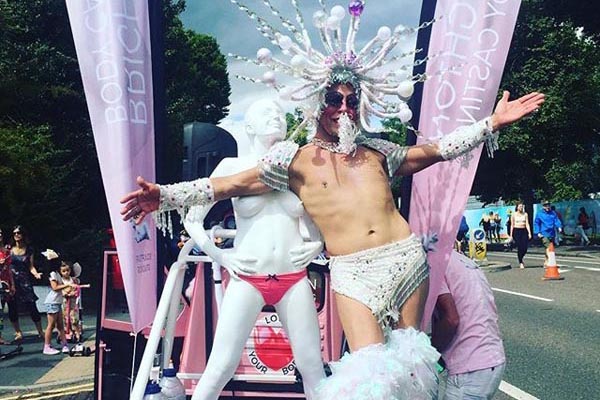 Mounted on a turntable on the back of the pink tuk tuk will be a life size topless sculpture whose nipples will squirt water 20 feet into the crowd when triggered by the pink cowboy hatted ‘rear gunner’. Only at Brighton Pride.

Joining the sculpture this year will be male and female nude helium balloons floating above the Brighton Body Casting float. Alongside and all around will be the usual selection of pink clad dancers and revellers. On what is predicted to be one of the hottest days of the year, the water jets are bound to be as popular as last year.

To fit in with this year’s theme Colour My World Jamie and his team have gone for the colour pink, to match their pink, tuk tuk pick-up truck, the smallest float in the parade!

Jamie said: “As a local business with a global reach it’s hugely important that we come out and join in Pride to support our local LGBT+ communities. Brighton thrives on its reputation as a friendly, open, inclusive and laid back city and this is the time when we get to show the whole world that we’re not kidding. It’s also a hell of a lot of fun!”

For the last 12 years Jamie has been creating sculptures cast from local people – anything from baby hands in plaster or glass to whole bodies in bronze. Established at the erstwhile JAG gallery on Madeira Dive, they were in the Lanes for a while, then by Hove Station and are now at a permanent, purpose built studio in the harbour in Portslade.  Jamie is involved in many community initiatives but Pride is the highlight of his company’s calendar.