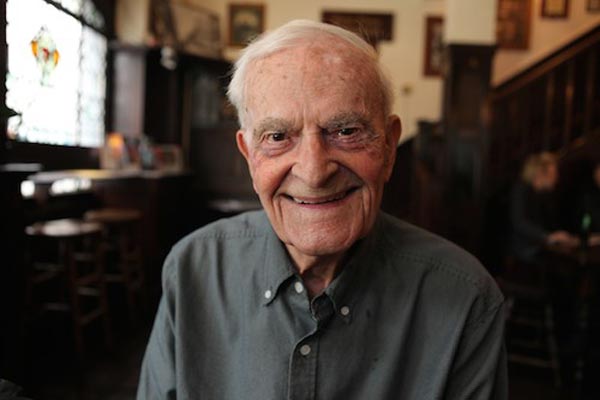 Stalwart champion of the NHS, Harry Leslie Smith will speak in Brighton on the future of the NHS on Sunday April 19.

HARRY – author, activist, and staunch defender of the NHS will make what he refers to as his last stand for Britain at Community Base, 113 Queens Road, Brighton at 2.30pm.

In an event hosted by Purna Sen, Labour’s parliamentary candidate for Brighton Pavilion, Harry will speak about the poverty of his past, the problems of the present, and the future of the country after the general election. With 92 years of experience to draw on, Harry says he is fighting to make sure his past doesn’t become our future.

Born to an unemployed coal miner in 1920s Yorkshire, Harry has lived through the Great Depression, fought in the Second World War, and endured post-war austerity. Having experienced the indignities of poverty first-hand, he is determined to keep our generation from the same fate.

His talk will touch on everything from inequality to political values, while focusing on the importance of the NHS.

​Harry touched the hearts of many people across the country when his deeply felt speech at last year’s Labour Party Conference was televised.

Speaking alongside Purna Sen, Harry will focus on how the NHS is a necessity which must be protected at all costs. As a man who grew up without it, few know better than Harry how vital the NHS is to Britain.

Purna said: “If there is one thing to learn from the past, it is that Britain needs a properly functioning health service and the future of our NHS relies on a detailed, fully costed plan.”

As the general election approaches, this special event will focus on some of the defining issues of British life.

It will be chaired by Ian Evans (a biomedical scientist who chairs Unite’s Healthcare Sciences committee), while local resident Geoff Braterman (a man who has relied on the NHS for recent care for his family) will also be attending to speak of his experiences.

The event will begin at 2.30pm on Sunday April 19 at Community Base.