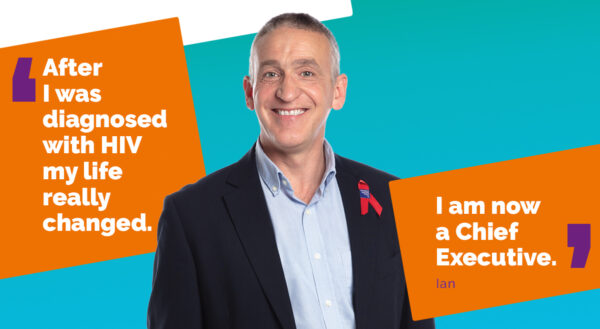 In the New Year’s Honours, Ian Green, CEO of HIV/sexual health charity Terrence Higgins Trust (THT), has received an OBE for services to charity and public health, while Lieutenant Commander Oliver Brown has been awarded an MBE in recognition of his work to overturn the outdated ban on HIV positive people joining the UK’s military.

Ian has been living with HIV since 1996 and leading THT since 2016. During this time, he has successfully campaigned for the availability of the HIV prevention drug PrEP on the NHS and seen the charity launch the first-of-its-kind postal HIV testing programme to ensure finding out your HIV status is as quick and easy as possible.

Under Ian’s leadership, the charity became the first third-sector organisation in the world to publicly endorse the message that people living with HIV and on effective treatment can’t pass it on (known as U=U). This led to our ongoing Can’t Pass It On campaign to take that stigma-busting message to as many people as possible, as it has the power to transform perceptions of HIV.

Lieutenant Commander Oliver Brown was diagnosed with HIV in October 2019 after a bike accident, resulting in a visit to a hospital piloting opt-out HIV tests in its A&E department. This led to him being medically downgraded by the navy in accordance with policy, despite no medical reason for this.

Oli set about challenging the restrictions in partnership with THT and other partners to ensure military policy is based on the most up-to-date evidence – and he won. The landmark policy change removed one of the last limits for people living with HIV to have the careers they want, and it wouldn’t have happened without Oli’s advocacy as someone already serving.

The ban was overturned in June 2022 and now people living with HIV who are on treatment and virally suppressed can join the armed forces. The rule change also means that those currently serving who are living with HIV can now be classed as fully deployable and not, as Oli was, medically downgraded.

Ian Green, CEO at THT, said: “I’m thrilled and honoured to receive an OBE in recognition of my work in charity and public health. As someone living with HIV, my work is much more than just ‘a job’, and I have gladly invested time, energy and passion to drive change for those affected by HIV and poor sexual health.

“Later this year, I will step down from my role at THT, and this honour has made me realise how much has been achieved. I would like to thank and share this with everyone who I have worked closely with over the years as we look ahead at all that’s still to do.”

Lieutenant Commander Oliver Brown, said: “My life and my naval career were changed by three letters when I was diagnosed with HIV out of the blue in October 2019. Now my life has been changed once again by three different letters, and I’m truly honoured to receive an MBE for my part in ensuring military policy on HIV is based on the most up-to-date medical evidence.

“I fought for these changes so that no one else would feel the way I did, for the many others living with HIV in the forces and for all those who will now join in the future. HIV isn’t and shouldn’t be a barrier to anything, and I’m very proud of the part I played to ensure that’s the case in the Navy and other armed forces.”