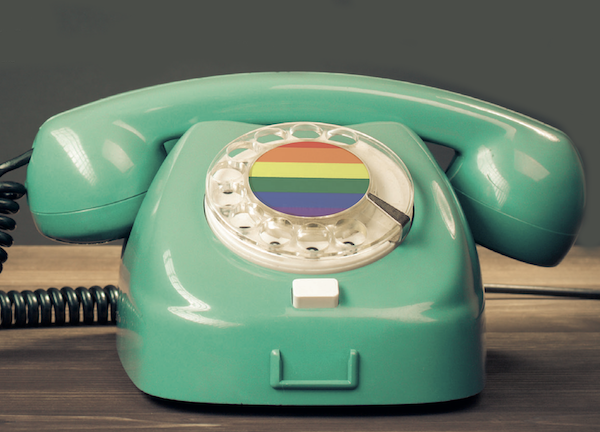 National charity Re-engage is launching a free telephone befriending service for older LGBTQ+ people who are especially vulnerable to loneliness, given decades of stigma and discrimination.

Re-engage, a charity dedicated to combating loneliness and social isolation in those aged 75 and over, hopes its new Rainbow Call Companions service, launched today, (March 14) will create a safe environment where people feel comfortable having open conversations. The service is specifically for LGBTQ+ people aged 75 and over who would like to speak to someone who’s also LGBTQ+. The same volunteer will phone each week to provide much needed friendship and conversation.

With the charity’s commitment to reaching a more diverse population of older people, it conducted interviews and an online survey to carry out research to better understand how it could provide services to older LGBTQ+ people based on their specific needs.

Research showed that as an older LGBTQ+ person, you are more likely to live alone, be single and less likely to see your biological family regularly.  You are also less likely to have intergenerational relationships and children, which can often lead to your ‘family of choice’ dwindling or increasingly unable to support you as you age together.

Meryl Davies, Re-engage CEO, says: “It’s not surprising to learn that a lifetime of exposure to discrimination and stigma can lead to high levels of stress and a strong sense of isolation. All too often, isolation is seen by older LGBTQ+ people as the price they have had to pay for their sexuality.

“Rainbow Call Companions is an important milestone in this amazing charity’s commitment to reaching deep into communities and finding the older people who really need us.”

Julian from Southsea, who has signed up to become a Rainbow Call Companions volunteer, said: “Much progress has been made in attitudes towards sexuality and gender identity, but many older LGBTQ+ people continue to live a life behind closed doors. It was a very different time back then.

“I am thrilled to be part of Rainbow Call Companions. It’s a two-way street and I’m looking forward to sharing stories, listening, learning, supporting and building up a rapport with someone who may have no support network or safe place where they can be themselves.”

Celebrities, including Sue Perkins, Miriam Margolyes and author Ali Smith, are backing the scheme to help older LGBTQ+ people feel valued and free to be open about their identities.

If you would like to be matched with a friendly rainbow call companion, or know someone aged 75 and over from the LGBTQ+ community who could benefit from a weekly chat, call 0800 716 543 (freephone) or email samuel.higgins@reengage.org.uk