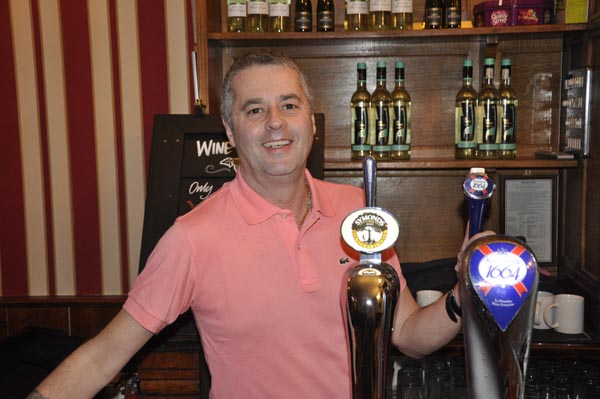 Collin Day, one of the most experienced managers on the commercial gay scene in Brighton, is packing his handbag and taking over the management of the Grosvenor in Hove on February 1.

COLLIN arrived in Brighton from East London in 1990. He managed Revenge for the next fourteen years, when the club was the centre of the gay universe and Brighton was considered the top destination in the country for clubbers and an ‘up for a party’ crowd.

Following the sale of Revenge in 2004 he took a four-year break from working on the commercial gay scene. He worked for Marks and Spencer as a section manager, where he said he served more queens than he ever did serving behind a gay bar.

The call of the beer pump got the better of him, and six years ago he returned for the next five years as manager of 112 Church Street. For the last year, he has been managing the Royal Oak in St James’s Street.

Collin created his Pooh La May character during his time at Revenge, where he would sit on the door in drag welcoming customers to the club each night. You could say he was a rather upmarket door whore, maybe Brighton’s first!

He then became one of the original, legendary Lollipop girls until he left in 2004 to further his career as a solo artist and landlady; the rest is history.

Collin said: “They were great days and I have so many happy memories, but now is the time to move on, set Hove alight and concentrate on getting all the locals back out into the local gay bars again.”

He continued: “I am looking forward to welcoming customers to the Grosvenor and hope friends old and new will come along to my opening party on Valentine’s night, February 14 at 9.30 p.m., when I will be joined by Maisie Trollette and a few surprise guests.”

Collin lists his hobbies as theatre, cinema, reading and men, especially those of the Thai variety. He is particularly proud of all the fundraising he has done for the Sussex Beacon and the Thai orphanage in Pattaya that many entertainers from Brighton help with financial support.

Collin who is a former Golden Handbag ‘Landlord of the Year’ is bringing regular cabaret back to Hove on Saturday nights at 9.30 p.m. He will be experimenting with new midweek events once he has got his booties under the table and he intends to try and win back his title of ‘Landord of the Year’ and see the Grosvenor voted ‘Best Small Bar’ at the Golden Handbags in June this year.