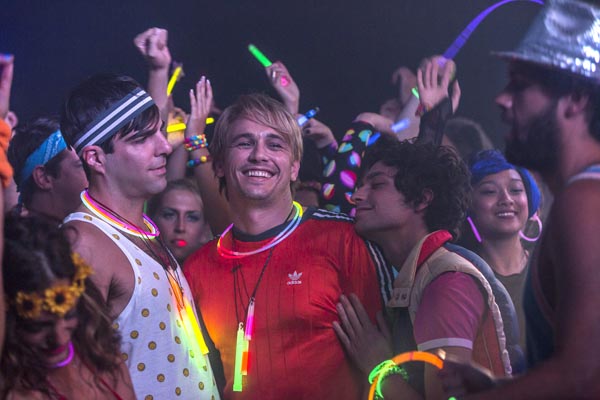 The British Film Institute (BFI) has announced that BFI Flare: London LGBT Film Festival will this year open with the UK premiere of I AM MICHAEL.

DIRECTED by promising newcomer Justin Kelly, I AM MICHAEL stars James Franco and Zachary Quinto, and is executive-produced by Gus Van Sant.

The film, adapted from Benoit Denizet-Lewis’ New York Times Magazine article My Ex-Gay Friend, tells the real-life story of Michael Glatze, a prominent US journalist and LGBT activist who wrote for XY, a leading gay magazine. After a profound and life-changing epiphany, Glatze gradually renounced his homosexuality and, turning to Christian ministry, became outspokenly opposed to queer lifestyles.

Clare Stewart, BFI Head of Cinemas and Festivals, says: “We’re thrilled to be opening BFI Flare with such strong new work from Justin Kelly, straight from its highly-applauded and hotly-discussed debut in Sundance. This is provocative, probing cinema that avoids easy assumptions and judgements and it’s sure to be a major talking point at the Festival.”

Of this year’s opener, BFI’s Deputy Head of Festivals Tricia Tuttle says: “I AM MICHAEL is an equally powerful new work, and it’s a real testament to the growing regard within the industry for BFI Flare: London LGBT Film Festival”.

The full programme of BFI Flare 2015 will be announced on February 18 and will be available online at www.bfi.org.uk/flare from the same date.

The Festival runs from March 19 to 29, 2015, at BFI Southbank, with over 50 features and 100 short films representing the best in contemporary and archive LGBT cinema from around the world.

In partnership with Creative Skillset, BFI Flare: London LGBT Film Festival is launching a mentorship pilot that will offer five emerging LGBT filmmakers from the UK a unique opportunity to develop industry knowledge, make professional connections, and help realise their passion for cinema.

From March to December 2015, selected filmmakers will have one-to-one support from a senior industry figure who will act as a mentor over the nine-month programme. They will also have access to a one-of-a-kind package that includes a wide range of BFI festival screenings and BFI Flare events, as well as filmmaker-focused events and talks.

The programme is open to writers/directors/producers who have previously screened a short or a feature film in any of BAFTA’s qualifying film festivals or in BFI Flare (or  LLGFF as it was). Filmmakers will be chosen by an invited panel of industry professionals.