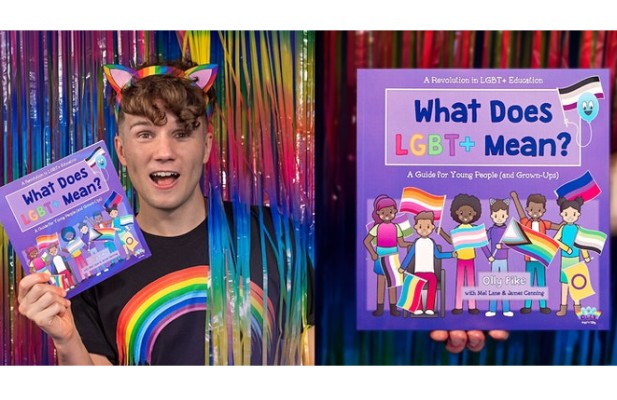 Pop’n’Olly, an educational organisation dedicated to creating LGBTQ+ resources, has published a first-of-its-kind non-fiction book to help introduce primary school children to topics such as identity, allyship, pride and discrimination. Titled What Does LGBT+ Mean? – A Guide for Young People (and Grown Ups), the book was created to help teachers introduce LGBTQ+ inclusive curriculums into the classroom, and is now available both online and in a number of UK bookstores across the country.

According to Just Like Us, 48% of children have received “little to zero positive messaging about being LGBTQ+ at school”, with the book’s co-author, Olly Pike, hoping to aid this issue: “I know first-hand that growing up LGBTQ+ is not easy. I felt lonely, anxious and ashamed. This book will not only help countless LGBT+ children and young people, it will also help create countless more future LGBT+ allies.”

Equality educator, PhD student and co-author, James Canning, said that the book aims to “revolutionise LGBTQ+ teaching in schools and provide educators with the tools they need to combat prejudice, whilst promoting positivity and acceptance.” He added: “I wrote this book because it’s the book I wish I’d had when I was a child”.

So far, the book has received high praise from children and educators, with 10-year-old Treasure saying: “I learnt that different people use different pronouns and how to respect them. I really liked the book and how it explained things. It was terrific!” Lukas Dressler, a children’s psychologist, also said they would “definitely recommend” the book to any counsellors working with children or LGBTQ+ people.

Since its first YouTube video in 2015, Pop’n’Olly has grown to provide a variety of LGBTQ+ resources and has distributed 20,000+ copies of Olly Pike’s books to children, parents and teachers around the world. Olly’s educational YouTube channel has now had almost 4 million views.