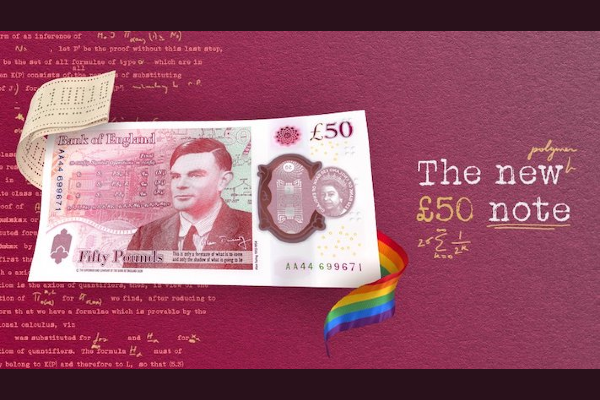 The Bank of England has today announced its new £50 note, due to enter circulation on June 23, 2021, is to celebrate the work of Alan Turing, the gay mathematician, computer scientist, logician, cryptanalyst, philosopher, and theoretical biologist.

Turing’s portrait is based on a photo taken in 1951 by Elliott & Fry which is part of the Photographs Collection at the National Portrait Gallery.

Alan Turing provided the theoretical underpinnings for the modern computer. While best known for his work devising code-breaking machines during WWII, Turing played a pivotal role in the development of early computers first at the National Physical Laboratory and later at the University of Manchester. He set the foundations for work on artificial intelligence by considering the question of whether machines could think.

Despite his ground-breaking work, Turing was prosecuted in 1952 for homosexual acts; the Labouchere Amendment of 1885 had mandated that ‘gross indecency’ was a criminal offence in the UK. Turing accepted chemical castration treatment, with DES, as an alternative to prison. He died in 1954, 16 days before his 42nd birthday, from cyanide poisoning.