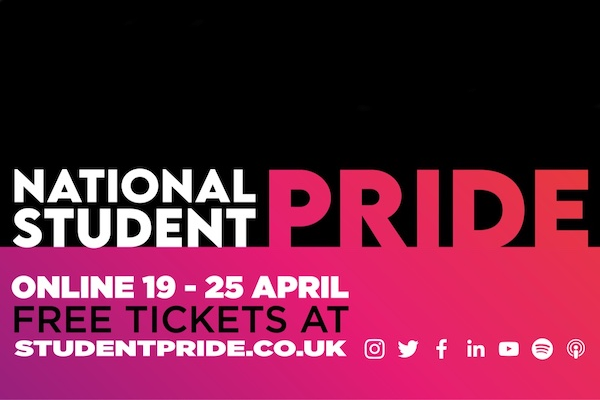 This Evening with Nick Grimshaw and Aimee Phillips

Hosted by broadcaster Nick Grimshaw and his best friend, creative director, DJ and stylist Aimee Phillips – on Wednesday, April 21 at 8pm, National Student Pride will be solving your problems, helping you cook, juszing up your fashion and serving exquisite art.

In association with Attitude magazine, and hosted by its editor Cliff Joannou, National Student Pride remains committed to staying at the forefront of national conversation by tackling one of the hardest of them all – mental health. In a year that has taken its toll on mental wellbeing, with the rise of loneliness and isolation disproportionately affecting young LGBTQ+ people, this high-profile panel on Monday, April 19 at 7pm will delve into experiences, knowledge and research about mental health in the post-pandemic world.

In these final days of lockdown, National Student Pride will bring you the boss level of online quizzes. Come and join Lorraine Kelly on Sunday, April 25 at 7pm as she hosts an irreverent celebration of British pop culture.

Lorraine Kelly will be joined by team captains Lawrence Chaney, the recently crowned winner of RuPaul’s Drag Race UK, and Tia Kofi, fellow Drag Race UK castmate and the breakout comedy star of the season. Joining Team Lawrence and Team Tia will be comedian, actress and writer Suzi Ruffell, and author and activist Charlie Craggs – with more contestants to be announced. This is one game show you won’t want to miss!

In conversation with Paris Lees

Ahead of the launch of her debut novel, What It Feels Like For A Girl, Paris Lees sits down at National Student Pride on Monday, April 19 for a conversation about the writing process, mental health, and her career as a journalist, presenter, and Vogue columnist.