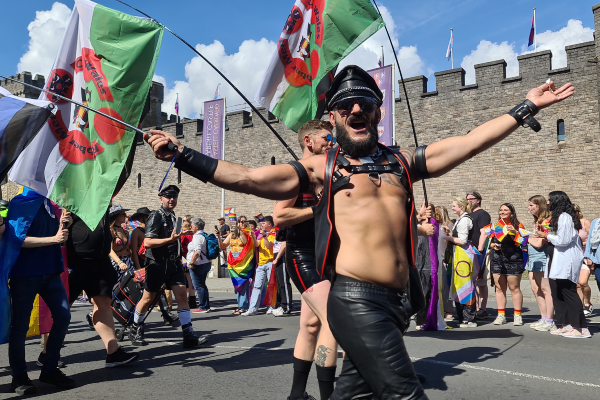 Eric Page returns home and enjoys the wonderful atmosphere of Queer love in the Welsh Capital, Cardiff. After the pandemic pause Pride Cymru returned with a massive turn out, blazing sunshine and a huge cheer in Cardiff on Saturday, August 27 as thousands of people marched through the main streets of Cardiff in support of LGBTQ+ rights.

The Cardiff Pride march is a community parade, filled with protest, performance, and some fierce looks, with all of Wales main LGBTQ+ groups, venues and employers taking part along with hundreds  of smaller support and social groups, it’s a lush parade – as they say there.

The theme of Unity and Uniqueness was shared across the parade with a strong focus on inclusion and Trans rights, some of the best placards I’ve seen at Prides this year and a wonderful friendly atmosphere.  With Gay Choirs singing, NHS Wales staff, the Sisters of Perpetual Indulgence, University of Wales, Unions and political parties the mile long plus parade was a riot of colour and calls for equality.  By 11am the streets were lined for the parade with many people bringing their families. Mark Drakeford the First Minister of Wales was seen walking around in a rainbow tie talking to the folk and being gently mobbed by people wanting a selfie, kiss or to shake his hand. It’s so refreshing to see elected politicians meeting their voters face to face, he’s obviously adored by most Welsh folx and tweeted later about his day.

There was an attempt at disruption by a very small anti trans protest groups who attempted to push their way into the parade protesting Lesbian erasure but seemed intent on disruption.  Refused entry onto the parade, moved on by the police and quickly side-lined by the good-natured parade and supporting crowd who drowned out their rants with 15,000 voices raised as one in support of Trans Rights.

Pride organisers said “There is no place for hate at Pride. And as our parade said today loudly and clearly ‘trans rights are human rights’,” said Gian Molinu, chair of Pride Cymru, in a tweet posted by the organisation on Saturday evening.

The Pride events over two days was thronged with a superb line up – Bimini doing a stunning live set which whipped the crowd up into a frenzy and living their best Cardiff lives for Mel C’s superb set which closed Saturday night. The main stage taking place in the Cultural Quarter with the Celtic Gothic splendour of the City Hall as a background and  the best bank holiday sunshine possible,  it was a huge success. St Mary’s Street, hung with huge Welsh and rainbow flags looked stunning in the bright warm sunshine. The Red Arrows did a thunderous fly over to open the event.  Cardiff Castle, it’s walls bathed in rainbow lights at night, hung with dozens of flags fluttering in the light breeze. It looked fantastic. All the venues were thronged all weekend and packed at night, showing just how well the Welsh capital can party. They’re a friendly crowd in Cardiff, and once again the Pride Cymru team delivered a safe, inclusive, and fun event with a focused passionate and community led activism at its heart.

Pride Cymru have released details and early bird tickets for their 2023 event, more details on their website here: