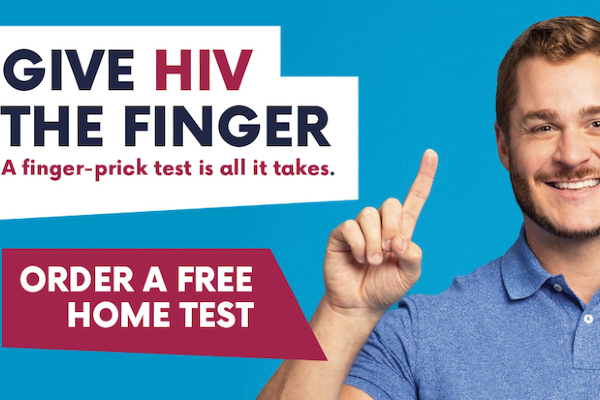 Coronavirus isn’t the only epidemic we can end through testing. By Jordan Page from Terrence Higgins Trust (THT).

The past year has taught us a lot: the value of our relationships, what our passions are, and most importantly, that good health is precious.

‘Testing is key’ – we’ve heard it countless times recently, whether at government press conferences, on social media or in the news. Knowing your status is crucial for making informed decisions about what to do next.

This message doesn’t only apply to Covid-19, though. National HIV Testing Week starts on Monday, February 1, and there’s never been a better time to test for HIV – especially for groups most impacted, including gay and bisexual men. We have the opportunity to end two pandemics in the coming years, all through testing.

This year, you can order a free postal HIV testing kit straight to your front door by clicking here. You have the opportunity to know your status from the safety (and comfort) of your own home – it can’t get much easier than that.

But why should I get tested?
HIV diagnoses in gay and bisexual men fell by 18% in 2019, which is the biggest drop seen in any group. Reading that statistic, you might be thinking, ‘Great! Job done!’ – but we’re not there yet.

In fact, gay and bisexual men are still the group most affected by HIV in the UK:

• Gay and bisexual men accounted for almost half of all people in the UK receiving treatment for HIV.

• In the latest stats, 35% of new HIV diagnoses among us came late – which is after damage to the immune system has already begun. Starting effective treatment earlier also means the virus will be more quickly suppressed and can’t be passed on to partners.

• Six per cent of gay and bisexual men living with HIV in the UK don’t even know they have it, which is bad for their health and also means HIV might be unwittingly passed on.

We all need to test regularly
It’s easy, quick, and FREE to know your HIV status. Knowing it means you can begin treatment immediately, prevent the chance of onward transmission, and live a long, healthy life. HIV no longer has to be an eventual death sentence – but you need to know your status to stop it from becoming one.

Why is now important?
We’re definitely spending more time than ever at home, giving us time to check off our seemingly never-ending to-do lists. Maybe you finally completed that puzzle you bought last year, that TV series you started but never finished, or you surrendered to your nagging partner and cleared out your loft.

Don’t let testing for HIV become one of those niggling tasks you avoid – especially when it’s easier than ever to know your status. It takes less than two minutes to order your postal HIV testing kit and it arrives straight to your home – you really have no excuse.

Another reason why now is the time to test? We have a landmark goal in sight, and we need your help to be able to reach it.

At THT, alongside National AIDS Trust and Elton John AIDS Foundation, we published the HIV Commission’s landmark report in December, brimming with ambitious and achievable ways to end new HIV cases in England by 2030 – just nine years (!) away.

The report’s core recommendation? You guessed it – increase HIV testing.

While we want to see everyone offered an HIV test whenever they interact with our healthcare systems – no matter their gender, ethnicity or sexuality – you can play your part in making HIV testing the norm, both within the LGBTQ+ community and outside of it. It starts with you.

Diagnoses in gay and bisexual men may be declining, but we can’t let this momentum slow down if we’re going to make England HIV-free by 2030. The more people test, the less stigma attached to HIV testing, and the closer we get to stopping new cases.

Give HIV the finger this National HIV Testing Week. A simple finger-prick test is all it takes.

Services in Brighton
Due to the Covid-19 pandemic, the THT team in Brighton & Hove are unfortunately unable to provide their full health promotion services at this time. But we are getting creative with what we offer digitally.

We’re currently offering free condom packs for those living in BN1, BN2 and BN3 postcodes in the Brighton & Hove area. While we encourage everyone to practise social distancing and discourage sexual activity with new partners outside their immediate household, we’re making these condoms available so you can have safe, healthy sex.

To order these condoms, you must be aged 18 or over, and either be:
• A man who has sex with men
• Trans or non-binary
• A sex worker
• Of black African or of black minority ethnicity

Additionally, while the Brighton in-person HIV testing clinic is currently closed due to lockdown, we are offering free HIV fast tests for Brighton & Hove residents by clicking here