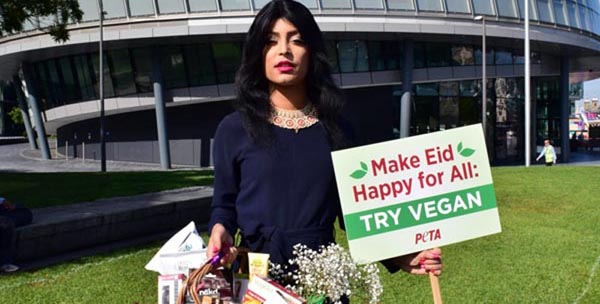 Asifa Lahore wishes London Mayor, Sadiq Khan a happy and peaceful Eid al-Adha with a vegan hamper to encourage generosity and compassion for all during the holy celebration.

Asifa, Britain’s first out Muslim drag queen, delivered the hamper of vegan goodies from PETA (People for the Ethical Treatment of Animals) to the Mayor’s offices today.

PETA – whose motto reads, in part, that “animals are not ours to eat” – says that according to the Prophet Muhammad’s teachings, an act of cruelty to an animal is as bad as an act of cruelty to a human. In today’s meat, egg, and dairy industries, animals are typically crammed by the thousands into filthy sheds, torn away from their families, denied proper veterinary care, and mutilated. Choosing to eat vegan foods spares animals this immense suffering while reducing our risk of developing cancer, heart disease, and diabetes.

Asifa said: “Eid al-Adha is a holy time of sacrifice and generosity to friends, family, and those in need, and none are more in need of our help and kindness than animals, which is why PETA and I encourage everyone, including Mayor Khan, to celebrate Eid with vegan foods and to invite friends and neighbours to share in the festivities.”