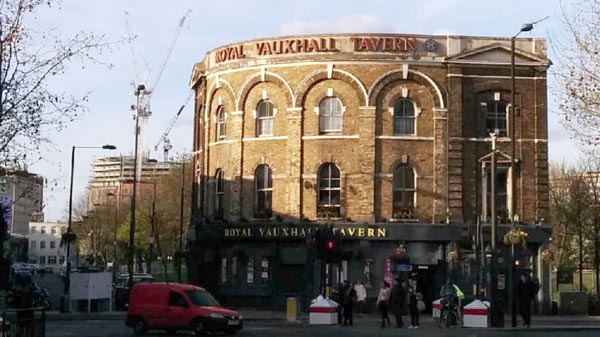 As London Pride approaches this weekend, Sir Ian McKellen and Paul O’Grady have given their support to a community campaign to make the Royal Vauxhall Tavern – believed to be the UK’s oldest LGBTQ pub and iconic performance space – a listed building for the same reason.

McKellen and O’Grady are among more than 30 performers, producers, local residents, LGBTQ charities, architects, historians and politicians who have written to Historic England (formerly English Heritage) to back the listing application made by RVT Future, a group of performers, producers and punters concerned by the RVT’s purchase by property developers last year. The pub’s local vicar is also on board with the campaign.

Paul O’Grady developed his legendary character Lily Savage at the RVT during a longrunning residency in the 80s.

Paul writes: “I consider the venue to be my very own school of dramatic art,” O’Grady writes.

“The Vauxhall Tavern was our village hall” during a turbulent era marked by homophobia, police raids and the AIDS crisis.

He notes that following the closure of LGBTQ spaces across London, including the Black Cap in Camden, Madame Jojo’s in Soho and the Joiners Arms in Hackney, the RVT “is now one of the few remaining venues to showcase new and old talent every week”.

He believes the RVT: “should be offered protection to withstand today’s developers…

“Without listing, the threat to its future is all too real. With listing I know the community will rally round and ensure it remains an important venue for many decades to come.”

Sir Ian McKellen has also written to Historic England to support the application.

“I support the campaign to grant the Royal Vauxhall Tavern listed status”, says Sir Ian, who was one of the original founder of Stonewall UK in 1989 and is himself co-owner of a listed pub, The Grapes in Limehouse.

The RVT was built on the former grounds of the Vauxhall pleasure gardens around 1862, and has been a site of LGBTQ community and culture since the 1950s, if not earlier and featured in last year’s international hit film Pride, ‘playing itself’ as a hub of community activism.

In the 1980s, RVT regulars Freddie Mercury and Kenny Everett took Princess Diana to the Tavern for a night out, having dragged her up as a boy so she wouldn’t be recognised.

Famously in 1984, during a Lily Savage show, the pub was raided by police wearing rubber gloves because they were afraid of catching HIV. Savage and ten others were arrested in the ensuing melée.

A vital site of community and activism for decades, the RVT remains the home of longrunning drag and experimental performance nights including Olivier award-winning performance company Duckie, whose Saturday night residency began in 1995.

The RVT was bought last year by Austrian property development company Immovate, which has repeatedly declined to give details of their plans for the site or meet members of the RVT community. This prompted the formation of RVT Future.

Immovate opposes the listing, claiming it would make even minor repairs so expensive that it would have to close the Tavern. The company has not given any evidence to support this claim. Hundreds of London pubs and businesses operate successfully from listed buildings.

Historic England makes its recommendations on listing to the Department for Culture, Media and Sport, which has ultimate authority over listing designations.

The result of the RVT application is expected at some point this summer.

Others who have written to Historic England to support listing the RVT include:

Munira Mirza, Deputy Mayor of London for Education and Culture

(* have appeared on the RVT stage)