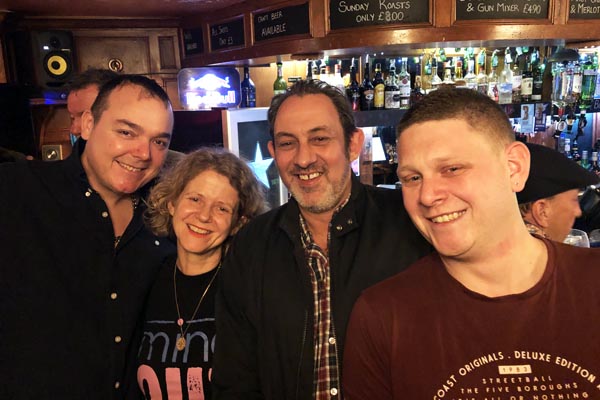 MARINE Tavern customers raised £5,519.18 for MindOut the LGBTQ Mental Health Service through their fundraising activities in 2018 which included a 150km bike ride over the Sussex Downs, various raffles, collection tins, fancy dress nights and a Brighton to Paris in 24 hours bike ride.

The staggering total was announced at a special reveal party at the Marine Tavern on Friday, January 25 hosted by entertainer Stephanie Von Clitz.

Kate Webb MindOut’s business development manager presented Lee Cockshott and Craig Harwood with a certificate of thanks from MindOut to recognise the pubs magnificent efforts.

Lee Cockshott, landlord and owner of the Marine Tavern announced that Lunch Positive the HIV lunch club would be the recipient of the pubs fundraising efforts in 2019 and set their fundraising target for the next year at £6,000.

Gary Pargeter, Service Manager at Lunch Positive was on hand to hear the news and thanked Marine Tavern customers for choosing Lunch Positive as their nominated charity to support in 2019.

The Marine Tavern have opened up a JustGiving page for their fundraising events for Lunch Positive in 2019.