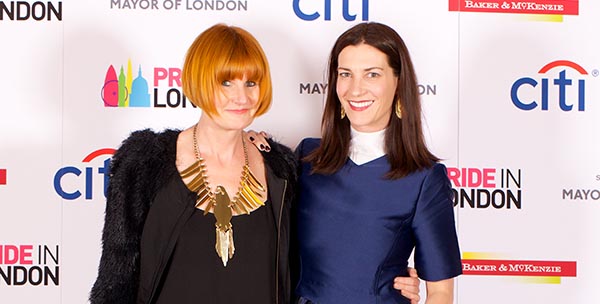 Over 300 leading members of London’s business community and their guests showed their support for the LGBT+ community at the annual event that raises funds for Pride in London.

At the Gala, it was announced that former Lord Mayor of London, Dame Fiona Woolf CBE, was becoming a Patron of Pride in London. Dame Fiona joins Sir Elton John, David Furnish, Sir Ian McKellen and Martina Navratilova who are all Patrons of the organisation.

Guest of honour, was Mary Portas who was accompanied by her wife, Melanie Rickey. Guests were entertained after dinner by Alfie Boe and Sinitta joined the party.

Political attendees included Secretary of State for Education, Nicky Morgan MP, the first out Lesbian in the House of Commons Angela Eagle MP as well as London Mayoral candidate Sadiq Khan MP and Sandi Toksvig, founder of the Women’s Equality Party. They were joined by human rights campaigner Peter Tatchell.

Dame Fiona Woolf, former Lord Mayor of London, said: “Last year I was delighted to host the first LGBT+ dinner at the Mansion House, it was an important moment both for Pride and to highlight diversity in the City. I am now honoured to be joining such an outstanding team of Patrons, and thrilled to be continuing my association with Pride. Together we will be working to ensure that talent is allowed to rise uninhibited in the capital, so people can be out and proud in all parts of London.”

Chair of Pride in London, Michael Salter, added: “The Mansion House is a magnificent and fitting setting to begin our celebration of Pride Heroes. Those heroes come from every walk of life and our campaign features scores both famous and unsung nominated by the community.  Our sponsors who gathered this evening make Pride possible and used the evening to celebrate the heroes in their own organisations as well as to raise additional funds to secure the future of the UK’s biggest LGBT+ event.”

Pride in London is a week-long festival, which takes place from June 20-28 and celebrates all aspects of the LGBT+ community. This year’s Parade will be on Saturday, June 27, alongside the festival in Trafalgar Square and activities in Soho.

The theme of this year’s Pride Parade is ‘Pride Heroes’, celebrating individuals who have contributed to LGBT+ rights over the years.