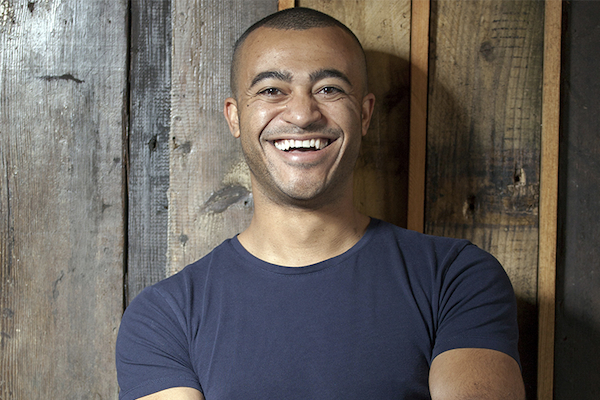 A Gay And A NonGay, an award-winning LGBTQ+ podcast from comedians James Barr and Dan Hudson, has announced a candid interview with Mark Fletcher, CEO of Manchester Pride, available now on all streaming platforms.

‘To see the level of hate that was levelled at me personally – and to the organisation was shocking. I felt alone, there were peers and people that we worked alongside that should have been supporting, that fell silent…they didn’t have anything to say” – Mark Fletcher

Mark is responsible for Manchester Pride’s adoption of the racially inclusive flag, with brown and black stripes – launched last year to ensure people from ethnic minority backgrounds feel represented. It now also includes the colours of the transgender flag.

He’s a private person, but in a special episode of the podcast, recorded as part of the Alternative Manchester Pride Festival, he opened up to the hosts as to why he feels the creation of the flag was necessary after the racism and fetishisation he‘d experienced whilst running the festival.

After reaching out to the local LGBTQ+ community to hear their experiences, he told James and Dan that he was shocked by what he discovered.

‘I was pretty disgusted.  I’m a private person but I had to check myself and think about what I could do.. to initiate change… and use my platform as a queer person of colour to say ‘woah – do you know what is going on here?! This is not OK’

The decision to launch the flag prompted unexpected controversy, making headlines around the world.

Nathan Gill, an MEP for Wales, tweeted: “Don’t recall ever seeing black or brown in a rainbow! But I am colour blind so maybe I’m wrong? If you’re adding colour of races – are they going to add a white stripe too?”

Mark told James and Dan of the unexpected resistance he faced from people and organisations who he had expected to be supportive.

‘To see the level of hate that was levelled at me personally – and to the organisation was shocking. I felt alone, there were peers and people that we worked alongside that should have been supporting, that fell silent. People that claim to represent LGBTQ+ people, they fell silent, they didn’t have anything to say’

During the lively, in-depth conversation, Mark acknowledged there is still a lot of work to do to combat racism, but praised the dating app Grindr for deleting its ethnicity filter as a step in the right direction, telling James and Dan its existence was ‘racism in its bluntest form’.

Hosted by comedians James Barr and Dan Hudson, A Gay And A NonGay is an award-winning LGBTQ+ podcast. James and Dan’s mission is to talk with honesty, promoting equality, freedom, friendship and laughter. Last year, they recorded a BBC documentary From Gay To NonGay? which shone a light on so-called gay conversion therapy in the UK. They recently released their Pronoun Collection, a customisable clothing range with sales raising money for trans youth charity Mermaids. For more info CLICK HERE.