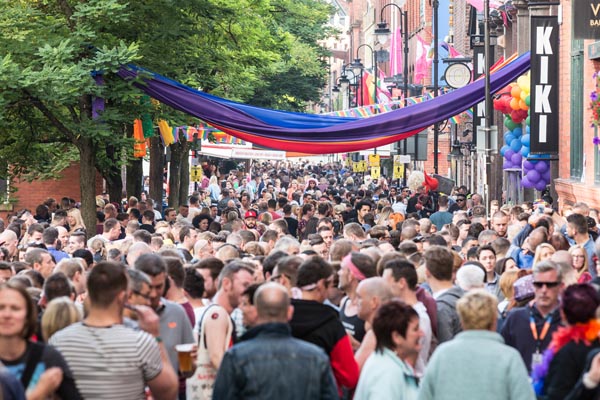 Charity celebrates acceptance as The Circus Comes To Town for the Manchester Pride parade in August.

The streets of Manchester will be overtaken by troupes of performers, acrobats and wonderful characters as The Circus of Acceptance takes over this year’s Manchester Pride Parade.

The Manchester Pride Parade, which this year takes place on Saturday 25 August, is one of the Festival’s highlights, with thousands of people marching proudly together through the streets of Manchester in front of tens of thousands of cheering supporters.

The Parade features 150 entries, equating to just over 5000 participants, in floats and walking entries from businesses and community groups across the region and will this year be one of the most visual and varied as it takes on the glamour and creativity of the circus.

As with last year the charity’s iconic issue that informs everything it does is ‘Education is the key to equality’. This year’s Parade theme is designed to shine a light on this in a creative way by reminding the people of Manchester and further afield that acceptance is a vital step in the continued progress of equality for all.

Mark Fletcher, CEO for Manchester Pride, said: “The circus is coming to town and all are welcome. This year’s Manchester Pride Parade will be a great opportunity to see many different types of LGBT+ people, each with their own individual quirks, skills, differences and fascinations all walking together in celebration!

“There are many millions of individuals that exist within Greater Manchester. Each different to the other. This is the same within the LGBT+ communities here and around the world. With the Circus of Acceptance as the theme for The Manchester Pride Parade, we’re proudly showcasing and celebrating the richly diverse LGBT+ people of our City and we’re inviting the people of Manchester to join in or come along to be entertained, to be inspired, and to be proud!”

Applications are now open for those who wish to take part. Businesses that have taken part in previous events have included Autotrader, Barclays, Marks and Spencer, John Lewis and The Big Weekend sponsors Thomas Cook Airlines.