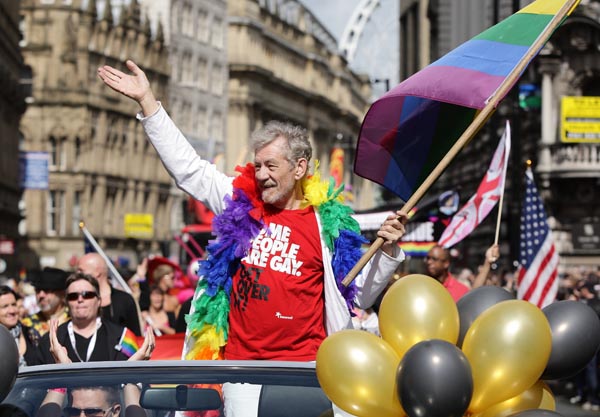 Mancunians are invited to share their stories in this year’s Manchester Pride Parade.

Applications are open for Manchester’s biggest lesbian, gay, bisexual and transgender (LGBT) street celebration as the charity announce they hope to turn the streets of Manchester into a fairytale with the theme – Once Upon A Time.

The parade which takes place over the August bank holiday weekend as part of The Big Weekend celebration sees as many as 115 organisations and over 3,000 people come together to march, and is watched by tens of thousands of people as it snakes through the streets of Manchester city centre passing by the Town Hall and the Gay Village before finishing on Whitworth Street.

In recent years it has been led by some of the most prominent faces in the LGBT world, including Orange Is The New Black actress Lea DeLaria and national treasure Sir Ian McKellen. Plus last year BBC Radio Manchester broadcasted live from the parade with transgender radio presenter Stephanie Hirst.

Participants have ranged from charitable organisations such as The George House Trust and Barnardo’s to community sports groups, Manchester Village FC and The Spartans RFC; commercial organisations such as Nando’s, United Utilities and Tesco; local community groups including The Village Bakers, Manchester Frontrunners and businesses from Manchester’s Gay Village such as The New Union and Kiki.

A firm favourite, taking part for the last six years is the cast and crew of Coronation Street, who always play a huge part in the Manchester Pride The Big Weekend celebrations. 2014 saw new recruit Les Dennis take to the show’s float in a pink tabard, curly wig and pearls as legendary show character Mavis Wilton.

Mark Fletcher, Chief Executive for Manchester Pride, said: “As we reflect on years gone by in our wonderful City, we recognise many stories, moments, events and occasions that have occurred in order to allow us to reach the level of freedom that our LGBT communities enjoy today. Once upon a time allows us to look back, reflect and plan the next steps for the advancement of LGBT equality.”