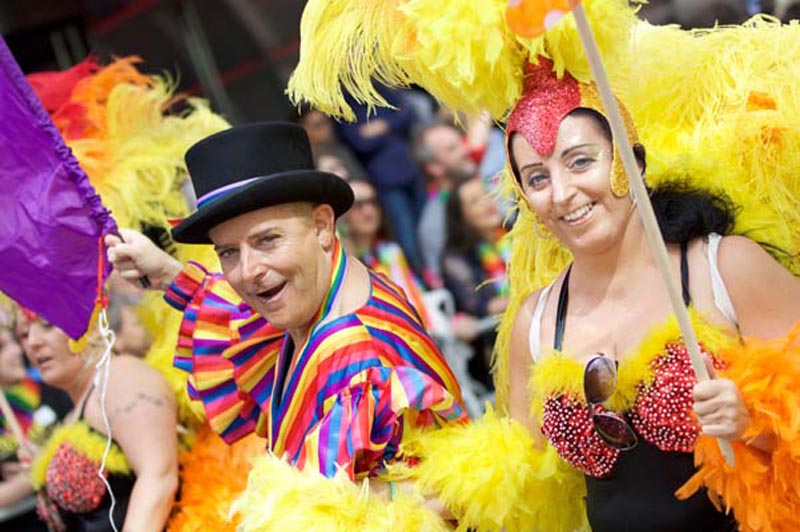 Thousands celebrated The Big Weekend at Pride in Manchester over the August Bank Holiday, (August 25).

Following the parade, the celebrations moved to the gay village where X Factor finalists 5 After Midnight, Melanie C, Pixie Lott, Ultra Nate, Katrina and the Waves, Faithless and Clean Bandit entertained the crowds during The Big Weekend.

Gareth81 commented on the Manchester Evening News website report of the event: “I have no problem with gay people. I have gay colleagues and a gay sister who I love very much. But Pride events make a city centre a no-go area for me.

“Heterosexual people don’t celebrate being heterosexual by parading themselves around the town half-naked snogging strangers, so I don’t understand why homosexual people feel the need to do this. It’s like Pride events are more about ‘sticking it to the man’ ie. the heterosexuals, rather than being proud to be gay.”

Manchester Evening News responded with the following statement: “Quite remarkable how many negative comments we have to remove or hide on stories like this.

To those asking when is ‘straight pride day’ or questioning why we still have Pride we’d ask this:

♦ Did you know that homosexuality is punishable by death in 12 countries? Celebrating Pride in those places can literally get you killed.

♦ Did you know there’s been a recent rise in homophobic hate crimes?

♦ Did you know that in Britain homophobic attacks rose by 147% in three months from June last year?

♦ Did you know nearly half of all trans children in this country have attempted suicide?

♦ Did you know it’s only been 50 years since homosexuality was decriminalised in the UK?

That is why we still have Pride marches. And Manchester’s is the best in the world.”

James Ledward, Editor of Gscene Magazine, commented: “Well done Manchester Evening News. It is heartening to see a mainstream newspaper take such a strong position on this issue, reminding us why Pride is still important and relevant in 2017.

If all regional newspaper editors demonstrated similar leadership and challenged their own local ‘Pride Haters’ is would help educate readers about the wider issues affecting LGBT+ people all over the world.

“We also have our own ‘Pride Haters’ here in Brighton, especially regarding the Pride Village Party. Businesses who complain that the Pride affects their trade on one day of the year should remember that LGBT+ people spend money in their shops every day of the year. If we collectively choose to withdraw our business, that will be 364 days a year trade suffers and not just the two days it does at the moment. Happy Pride!