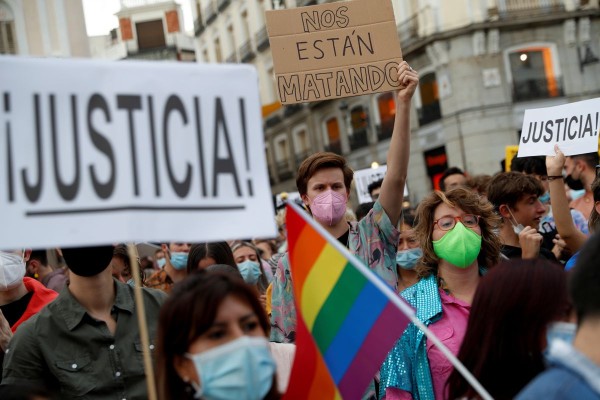 Hundreds of marchers gathered in central Madrid on September 11 to protest the rising number of anti-LGBTQ+ hate crimes in Spain, with attendees being seen holding rainbow flags and banners that said ‘justice’. Speaking to Reuters, protestor Gabriel Escribano said the march was organised to make a statement against the “continuous homophobic attacks and the constant aggressions” that are happening in the region.

They continued: “We believe we have to say: enough is enough.” Prime minister Pedro Sanchez recently held an urgent meeting of leaders to address the issue, but protestors demanded that the government do more to protect Spain’s LGBTQ+ community. Confirming the rise in hate crimes, a 2020 report by the European Union Agency for Fundamental Rights found 41% of queer Spaniards have experienced harassment in the past year.

An additional 16% of queer people said they avoid holding hands with their partner in public through fear of being assaulted, threatened or harassed. Overall, 23% of LGBTQ+ Spaniards said they were not open about their sexual orientation and/or gender identity in their daily life due to fears of discrimination. This year alone has seen numerous hate crimes, with Spain’s Observatory Against Homophobia issuing a warning over the situation.