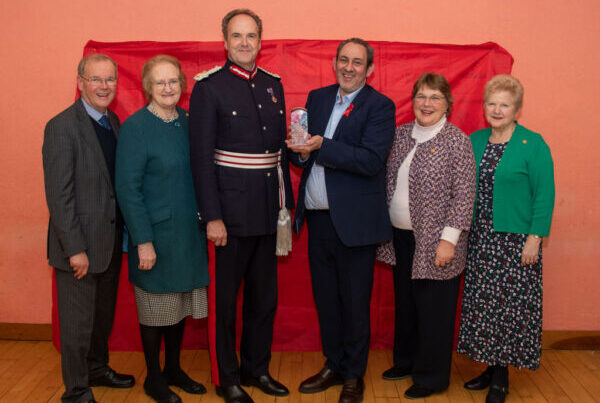 At a special ceremony on Friday, December 2, HIV charity Lunch Positive received the prestigious Queen’s Award for Voluntary Service. The Lord Lieutenant of East Sussex, Mr Andrew Blackman, who is the monarch’s representative in the county, came to the Lunch Positive HIV lunch club accompanied by the Vice Lieutenant and three Deputy Lieutenants.

The extremely competitive award was attained in June this year, and is considered to be the highest award given to volunteer led groups, the equivalent of an MBE. The award is given for life.

At the award ceremony, Deputy Lieutenant Roger French read the royal proclamation for the award which was signed by Her Late Majesty the Queen. The Lord Lieutenant of East Sussex presented the award to the Director of Lunch Positive, Gary Pargeter. The room was full of volunteers, lunch club members and invited guests, all greatly moved by the significance and importance of the award.

At the ceremony, Gary Pargeter accepted the award on behalf of the whole team and the organisation. He commented on the astounding team work always undertaken by the volunteer team as part of providing their services, along with the constant sharing of peer support and lived experiences of HIV, all invaluable to everyone.

Gary Pargeter, Director of Lunch Positive, added: “We are overjoyed to receive this highest award for volunteer-led groups in the country! It stands as an amazing testament to the hundreds of thousands of hours given by our volunteers since Lunch Positive formed 13 years ago, and above all the exceptional quality of their leadership and work.

“As well as the ever impactful HIV lunch club we also provide a food bank and outreach; a befriending project; advice and information giving, a wellbeing programme, peer-support activities, and support groups in Sussex. Our HIV volunteering programme is unique, and our recent cost-of-living project, the Tuesday Warm Hub is another example of our deeply rooted community activities.

“This reaches the most vulnerable at this challenging winter time. All of this is provided by the most wonderful people, our fantastic volunteers. The difference they make to the lives of others is outstanding!”