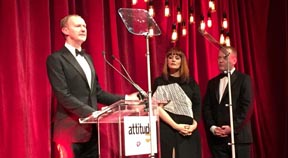 After 40 years of service to the LGBT community, London Lesbian and Gay Switchboard was honoured with the ‘Community Award’ at the Attitude Awards 2014 on Monday night.

THE AWARD was collected on behalf of the charity, at a star-studded ceremony in London, by the Doctor Who and Sherlock writer, Mark Gatiss, who made an urgent appeal for funding to support the service.

Gatiss said of LLGS’s work: “In this day and age of the Internet and social media, gay people have never been more disconnected and people rely more than ever on calm words when you need them most.”

He added: “With recent funding cuts, LLGS rely more than ever on donations and support from the community.”

London Lesbian and Gay Switchboard said they were “delighted” by the honour and echoed Gatiss’ appeal for urgent funding and donations.

A spokesperson said: “This year has seen LLGS celebrate its 40th year but with its core funding now cut, the charity relies increasingly on donations and fundraising to survive.”

LLGS provides free, confidential support and information to lesbian, gay, bisexual and transgendered communities throughout the UK daily between 10 a.m. and 11 p.m. by telephone on 0300 330 0630 and by instant messaging at www.llgs.org.uk

For details of how to support LLGS, CLICK HERE: