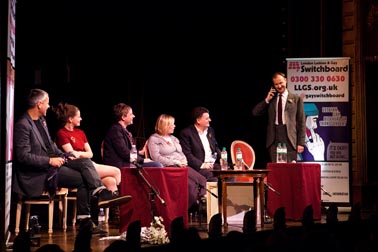 Actor and writer Mark Gatiss hosted an exclusive fundraiser at the Criterion Theatre in London on November 11 in support of London Lesbian & Gay Switchboard.

The Game Is On: An Afternoon with Mark Gatiss & Friends brought together special guests from BBC1’s hit show Sherlock.

Taking part were Sherlock series creators Gatiss and Steven Moffat, as well as producer Sue Vertue. The Sherlock crew were joined by actors, Martin Freeman, Rupert Graves and Louise Brealey. It was the first time that so many of the cast and crew had taken part in a public event together. The panel answered a range of questions about the series, which has become a global phenomenon since it first aired in 2010.

The event, raised around £13,000 for London Lesbian & Gay Switchboard who provide information and support services to the LGBT community. These include a free and confidential telephone helpline, instant messaging and email support.

Founded in 1974, London Lesbian & Gay Switchboard is one of the oldest LGBT organisations in the UK. It has about 170 volunteers, all of whom identify as lesbian, gay, bisexual or trans, and who speak to about 20,000 people a year.

For further information or to make a donation view:
London Switchboard