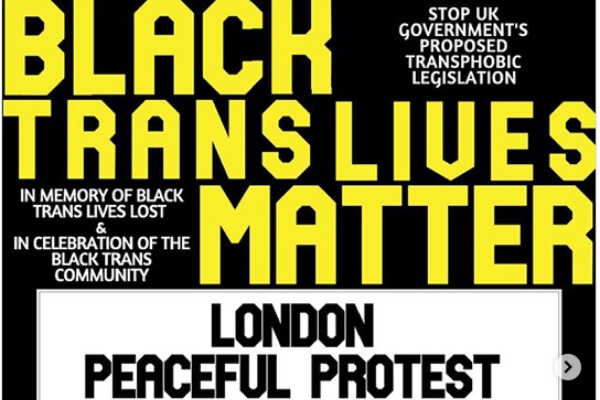 London Trans+ Pride will lead a peaceful protest for Black Trans Live Matter today, June 27th. The march will be a demonstration against transphobic legislation proposed by the government, a commemoration of Black Trans lives that have been lost and a celebration of the Black Trans community.

Starts Wellington Arch at 2pm and end with speeches at Downing Street at 3pm.

The organisers of Saturday’s march have asked attendees to bring flowers, wear masks and keep to social distancing as much as possible.

“As both a black and trans person I never thought I’d be living to see a point in time when almost the entire world came together as one to say this is not acceptable, black people deserve better and we should’ve always known that they deserved better.

“We should’ve always been fighting harder and we didn’t, so we’re going to do that now and we’re not going to stop.”

Two of the most recent black trans women deaths occurred in the US within the same 24 hours earlier this month on 9 June.

Dominique Rem’mie Fells, a black transgender woman was killed in Philadelphia, Pennsylvania and 25-year-old Riah Milton, also black and trans, was killed in Liberty Township, Ohio. Both were misgendered in the press reporting on their deaths.