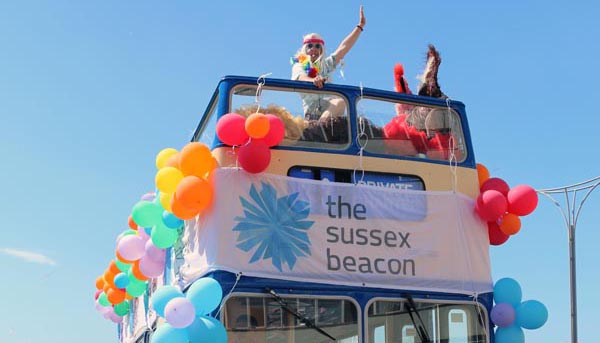 Money has been counted and local businesses raised over £4,600 for The Sussex Beacon during Pride week at the beginning of August.

The total raised so far is £4675, with a few more donations still to be submitted.

A team from The Sussex Beacon joined the Pride Parade in an open top bus, taking the opportunity to thank local people for their support.

Some of the fundraising included:

Simon Dowe, Chief Executive of The Sussex Beacon, said: “We are so grateful to all the fantastic organisations and individuals who raised money for The Sussex Beacon during Pride. What a generous lot! The donations will make a huge difference to our work, supporting people living with HIV across Sussex.”

The Sussex Beacon provides specialist support and care to people living with HIV, offering both inpatient and outpatient services to improve health and promote independence.

Those using the charity’s services may be facing serious HIV related illnesses, dealing with mental health issues or struggling to cope with the side effects of new drug regimes.

Recently rated ‘outstanding’ by the independent health regulator, The Sussex Beacon provides first class care and support to those in need.

To find out more about the Sussex Beacon, click here: