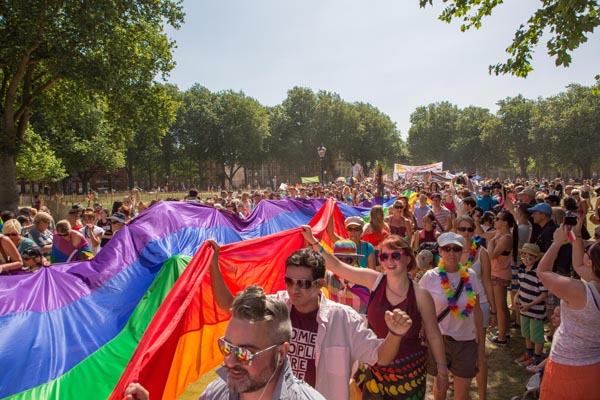 This year’s Bristol Pride Festival will take place from July 1-10 with the main festival day on Saturday, July 9.

Pride Day starts with a parade through the city departing 11am from Castle Park. This years longer parade route will pass through the city centre, proudly celebrating those that make up the diverse L.G.B.T and + community.

Pride Day remains a free event ensuring that no one is excluded for socio economic reasons, to further community engagement and cross community education and to ensure those isolated and most in need of Pride are able to attend.

The Saturday festival boasts over 50 local and international acts performing this year across 3 stages.

Multiple Brits, Ivor Novello and World Music Award winner Lisa Stansfield will headline the main stage and be joined by:

The festival has again teamed up with a number of partners to offer a £5 festival wristband to help support the costs of the event and keep Pride happening.

Wristbands offer discounts on site including on food and the bars, discount entry to the At-Bristol science museum, discounted Ferry travel and free travel on Pride Day with First Bus.

Joint evening tickets are available for £15 which offers entry into 3 separate after parties including the O2 Academy, Queenshilling and Hush at Basement 45.

The official after party, will take place at the O2 Academy and feature a live performance from Bright Light Bright Light whilst DJs include Guilty Pleasures, Don’t Tell Your Mother, Revenge of the 90s as well as R&She who’ll be playing nothing but the queens of RnB and Hip Hop.

The Pride team are also very excited to be bringing Bestival and Glastonbury favorites Fleetmac Wood to Pride. Under the theme of light there will be roaming performances, aerial hoop artists, Dark Island Dance troop and interactive acts spread across 3 rooms.

10 days in length the Pride Festival hosts a number of events across Bristol and uses the Arts to champion equality, tackle community issues and develop a platform to support local talent.

Highlights of the week will include the Pride Theatre Night on Wednesday, July 6 at the new Wardrobe Theatre, featuring a reworking of Shakespeare’s Venus & Adonis that explores themes of gender fluidity, Boogaloo Stu’s Much Ado about Bingo and comedy in the form of #AppilyEverAfter charting the perils of App Dating.

Other events not to miss include a talk with InterEngineering and EDF centered on the workplace, the Pride Dog Show on Saturday, July 2, and the award-winning week-long film festival Queer Vision at the Watershed.

Bristol Pride attracted over 31,000 people to its events last year, was named in the top 3 reasons why visitors came to Bristol in 2015 and was praised by Mayor George Ferguson as bringing more into the local economy than any other Festival.

The Pride team also continue their Green Capital initiatives with e-usable cup scheme, generator free stages supported by EDF Energy and even the waste from the festival port-a-loos will even be used to the power a Bio-Bus.

Organiser Daryn Carter said: “Bristol Pride has grown from strength to strength, we’re one of the biggest Prides in the UK and I am proud to be delivering amazing acts, performers and events throughout Pride Week.

“We’ve got a lot to shout about and it’s great to see Pride recognised as one of the leading events in the city but we still have a lot of work to do. Pride is our opportunity to celebrate our community, but also to tackle issues affecting it such as isolation, hate crime, prejudice and discrimination in our schools, streets and workplaces.”

Bristol Pride is a registered charity: 1166817, run by volunteers and works all year round to challenge homophobia, biphobia and transphobia and to promote equality and diversity, for all, through various events and activities which include school visits, campaigns, talks to business, consultation services and lobbying.