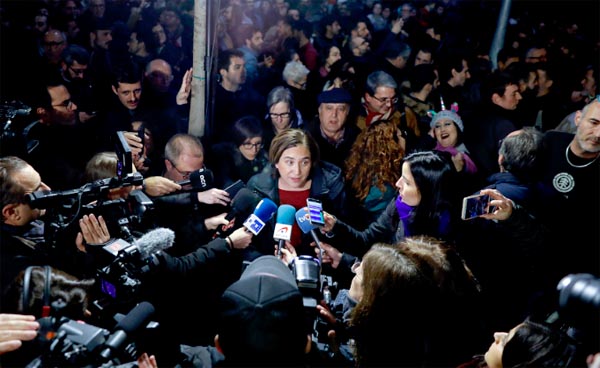 One week after its inauguration, celebration turned to dismay as the new LGTB+ Centre in Barcelona was vandalised with facist symbols and graffiti which read Fuck LGBT. Its windows were smashed and entrances blocked with crash barriers.

THE authorities were quick to respond with both the mayor and local Catalan government defending their LGBT+ communities and speaking out in favour of sexual and gender diversity.

Mayor Ada Colau took to twitter to proclaim the importance of the centre and the diversity of Barcelona itself and on Monday evening led a crowd thousands strong who gathered outside the centre in celebration of the city’s LGBT+ communities.

Locals were quick to handwrite post it notes of support and stick them around the anti-LGBT+ graffiti.

The new LGBT+ Centre opened as a self-described pioneering space for sexual and gender diversity at the forefront of LGBT+ matters in the city. Besides offering information direct support services, the centre is also designed to give a voice to artistic expression and collective action.

Ada Colau, Barcelona’s first female mayor said at the inauguration event: “We are standing up for this proudly diverse city, which wants to be an example in the fight against homophobia and in defence of our rights and freedoms”.

Barcelona and nearby Sitges are amongst the worlds most popular destinations for LGBT+ travellers.