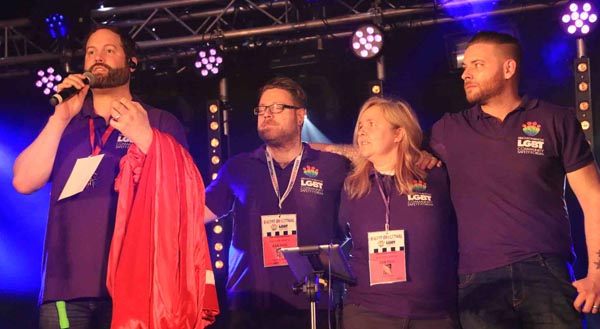 I wanted to write and thank Billie Lewis and the volunteers from the Brighton & Hove LGBT Community Safety Forum, for everything they did to help us with the Soul Safari days at the B Right On LGBT festival.

They did an absolutely amazing job with everything, and the space they created for us to work was great. It gave so many groups, including The Village MCC, the opportunity to feel that there was a bridge between the LGBT+ community and ourselves.

The Brighton Gay Men’s Chorus were able to mourn one of their own, acknowledging the dreadful loss whilst also celebrating the life of a good friend. Quakers, Buddhists, Christians, Pagans, Wiccans, Jews, and interfaith groups, as well as those who use mindfulness and other techniques to help someone ground themselves, were able to claim a place in the spectrum of LGBT+ spirituality and be recognised. It was a unique opportunity and appreciated by everyone involved.

None of this would have happened without the hard work of Billie, David, AJ, Kelly, Becky, Gavin, and the Lunch Positive volunteers led by Gary Pargeter.

I was so proud to be a part of a church where so many also volunteered their time and resources to support the event, but none of us would have had the opportunity to do so without the team from the B&H LGBT CSF.

The B Right On festival was a celebration of LGBT+ history month, and included lots of exceptional social events and some first class entertainment. If organisers had decided that nothing more was needed the festival would still have been a great success. Yet, understanding that LGBT+ life often includes a spiritual element, the B&H LGBT CSF planned to include that too. It took a huge leap of faith, and we applaud them for it.

Thank you for everything Billie. I do hope that the festival is repeated next year, and that once again those on the margins of the margins are recognised and given a voice.

Thank you so much for trusting us at The Village MCC to organise it, and I hope that you feel able to do so again.