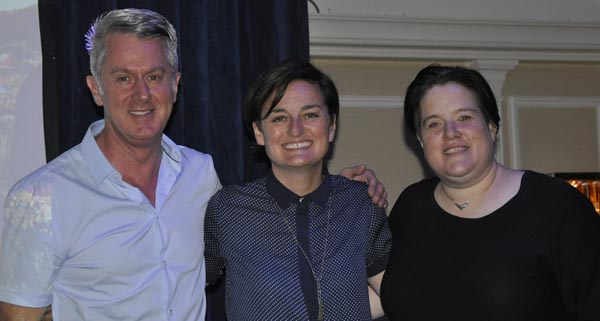 Legends financial support for this years Pride amounted to £6,542.27 which included a £1,000 personal donation from Tony Chapman, sponsorship for the Cabaret tent on Preston Park and money raised at the Sunday Cabaret Extravangza during the Village Street Party.

Individuals honored with Pride Legend medals included DCI Paul Betts and Chief Inspector Katy Woolford from Sussex Police who both worked in Silver control over Pride helping support a safe Pride weekend for locals and visitors alike. Katy also worked alongside colleagues at the council to support issues around young people during Pride.

The contribution of the East Sussex Fire Service was also acknowledged with Dexter Allen receiving a Pride Legend medal. Dexter has worked on Brighton Pride for many years and is retiring from the fire service this year.

A Pride Special Award went to Ian Taylor from the council’s event team who works throughout the year supporting the planning of Pride.

The LGBT Workers Forum at Brighton and Hove City Council won the award for best float on the 2015 parade. Council employee Colin Blanchflower accepted the medal on behalf of the forum.