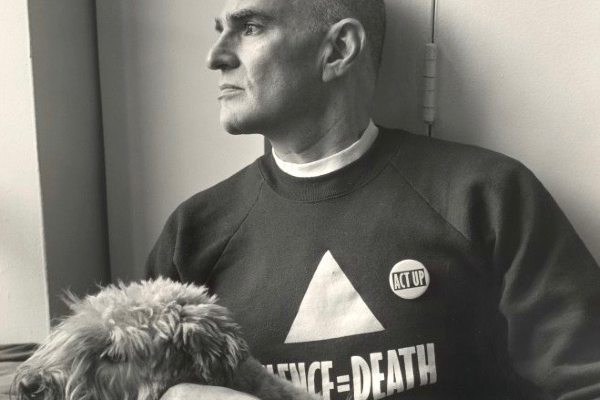 Larry Kramer, writer and activist, who led, fought and won a campaign to fundamentally change American health care policy has died at the age of 84.

His death, of pneumonia, was announced by his husband David Webster.

As an author and playwright he is best remembered for his autobiographical play The Normal Heart, as an activist for founding Gay Men´s Health Crisis, effectively the world´s first organisation providing care and advocacy for HIV positive people. His fellow Directors forced him out for being too aggressive, and so he then went on to found the far more militant organisation, ACT UP.

ACT UP expressed their anger against the Reagan Administration, City administrations, the Catholic Church and Wall Street with direct action and street demonstrations. Demanding, not asking, for a speed up in finding effective medication. Their shock tactics were recognised even by some of the people he called murderers, including Dr Anthony Fauci (currently leading the USA’s response to the Covid-19 pandemic) who ended up a friend, understanding the necessity of the changes that Kramer insisted on. Kramer never saw the need for schmoozing, and polite requests – ‘If you write a calm letter and fax it to nobody, it sinks like a brick in the Hudson.’

Quoted in the New York Times, Dr Fauci said ‘Once you got past the rhetoric you found that Larry Kramer made a lot of sense, and that he had a heart of gold.’

Larry Kramer´s reputation is not just based on his role of Provocateur General, he has a solid body of work too, both as a screenwriter (he adapted DH Lawrence’s novel Women in Love), and a novelist (his first novel Faggots caused a sensation because of its depiction of gay lifestyles and suggestion that gay men and women could achieve more were they not only defining themselves by their sexuality).

‘I was trying to make people united and angry. I was known as the angriest man in the world, mainly because I discovered that anger got you further than being nice. And when we started to break through in the media, I was better TV than someone who was nice.’

Peter Tatchell, Director of the Peter Tatchell Foundation whose life of LGBTQ+ activism and direct action mirrored that of Kramer’s, and who also knew him, released this statement:

‘Larry Kramer was an inspiring playwright, author and pioneering campaigner on LGBTQ+ and HIV issues. He helped galvanise the formation of the AIDS activist group ACT UP, which successfully challenged US government inaction and forced pharmaceutical companies to speed their efforts to research and trial treatments. He also helped establish the Gay Men’s Health Crisis, which did so much to support people living with HIV/AIDS.

‘ACT UP’s efforts helped save the lives of millions of people worldwide and Larry was part of that achievement. His often angry tirades against President Reagan, the New York Times, drug corporations and the medical establishment were searing and effective. I counted him as a friend and comrade. He will be missed and remembered for decades to come.’